As we move into March for 2018 we start off with Jupiter turning retrograde just inside the cusp of sidereal Scorpio, and then retrograding back into Libra and not re-entering Scorpio until October of this year.  So we get a taste of possibly the higher-leveraged success that is potential with Jupiter in Scorpio, but it doesn’t really kick in until much later this year.  Jupiter in Libra is more of a relational and refining type of energy, hopefully bringing elements into balance before they undergo the Scorpionic stresses and intensity.

I have a whole document that addresses the transits of Jupiter for each sign for 2018.  It’s completely free, you just have to sign up for my email newsletter to get it.  Get it HERE.

Mercury stationary retrograde this month takes place in its sign of debility, Pisces, and receiving Vedic square from Mars in Sagittarius.  This could be a particularly problematical Mercury retrograde period: miscommunications, setbacks and delays in affairs, and maybe slightly harder to get past biases, predispositions and overall mental and emotional dysfunctions.  The Mercury retrograde period runs from March 22 to April 15, 2018.

Just prior to Mercury making its regular retrograde station (occurring about three times a year) we have the Vernal Equinox.

The world is a macrocosm to our microcosm.  We have our periods of emergence (spring), peak activity (summer), harvest (autumn), and then sleep/hibernation (winter).  Every day we repeat this eternal cycle: awakening, the work day, recreational evening, and then sleep/rest.

Life as One Whole Living Thing, reflects it infinitely upward and downward.

The Vernal Equinox is also the beginning of the tropical, or Western, zodiac; where they mark off the first degree of Aries.  I won’t get into the seasonal verses stellar approach to astrology here, but you can read more about that HERE. 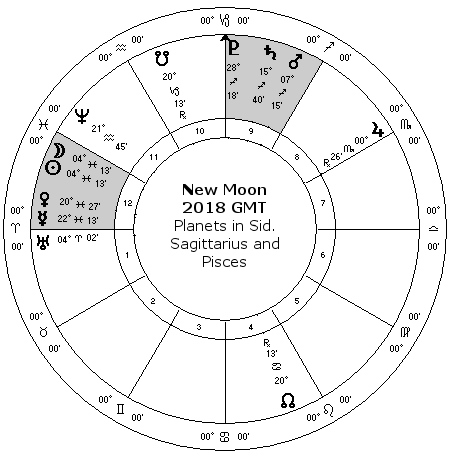 A concentration of three or more planets in any one sign is called a stellium, right now we be having two stelliums.

As a reaction to this particular juxtaposition of planets we may be moving through ideological (Sagittarius) and then spiritual or dissolutionary spaces at the same time.  Over the last few months in the US we’ve sexual harassment in the media and industry, and lately with gun control in the Florida school shooting.

Looking at the picture above, with heavyweights Mars, Saturn and Pluto in Sagittarius there may be some heavy-handed implementation of partisan policies, with any amount of philosophical/religious motivation behind it, being brought to bear on us.

With the lighter-weight Sun, Mercury and Venus in Pisces, the reaction might be “Oh, well, what can you do.” Or, perhaps, “Yeah, okay, that seems to be right with me”, when statements or thoughts are on very questionable, very biased, or simply erroneous.  Sometimes we like to have people do the thinking for us, but it’s very dangerous.

The full moon of March 31 then falls in Virgo, which then forms a t-square to the Sagittarius-Pisces planets, setting them off somewhat, possibly making a somewhat more intense end of month, leading into April.

Friday, March 2, Full Moon
With the full illumination of the Moon on us, we may be inspired to new creativity and to make new discoveries.  Be sure to keep everything in the realm of practicality and not “pie in the sky” ultimately helping no one.  (Mercury trine Jupiter)

Sunday, March 4
The Earth, Sun and Neptune line up today; boundaries of thought, selfhood, and creativity may fall away.  Let not what expands merely be the petty concerns of the ego.  Cordiality is enhanced.  Mars moves into limitless-loving Sagittarius, be sure not to run anyone over charging out the gate.  (Sun conjunct Neptune, Mercury trine Venus)

Thursday, March 8, Jupiter Stationary Retrograde
Anything is possible basically because we think it is so.  The world we create today may be somewhat exaggerated, or larger than is practically possible.  Dreams, however, need more than just an amazing imagination; they demand work, commitment and perseverance to become a reality.  Powerful emotions may accompany meetings and/or situations.  (Venus quintile Pluto)

Saturday, March 10, Mercury at Perihelion
Delays and setbacks may seem to thwart your joy, yet an applied mental focus may deliver much more surprising results.  Slowed progress, but progress nonetheless.  (Sun quintile Saturn)

Thursday, March 15, Mercury at Greatest Elongation
No aspects forming today, but Mercury is at greatest distance from the Sun.  Realization, communication, and brilliance are highlighted.

Saturday, March 17, New Moon
The dark moon leaves us temporarily bereft of it’s illumination, albeit illumination of a lesser light.

Tuesday, March 20, Vernal Equinox
We all “turn the corner” of the seasons, entering a new quadrant of terrestrial experience.  Our brothers and sisters to the south/north turn to the opposite pole of season.  Either the day or the night now attains supremacy, with life appropriately expanding or contracting.  It’s a universal rhythm, yet the equinox we are now in reminds us to be “in balance”, to be in perfect equipoise, unaffected by extremes or externalities. Venus biquintile Jupiter today help us to more truly experience that state of grace, which can be the open door to all good fortune.

Thursday, March 22, Mercury Stationary Retrograde
Mercury, the trickster god, stands still in the sky apparently, shifting to backwards gear.  The perception and experience of life might be a little more internal or subjective for the next three weeks or so.  Mars quintile to Neptune, can help to put a dysfunctional “happy face” on some serious deceits, either what we send out or accept.  What some people might see as weakness, may more truly be a great strength underneath.

Friday, March 23
Events and circumstances may lead to shifts in personal development, not necessarily in a subtle way.  Don’t let the tyranny of emotions usurp your self-sovereignty.  (Venus square Pluto, Sun quintile Pluto)

Monday, March 26, Moon at Perigee: 5:17 PM GMT
Other that the Moon at it’s monthly closest approach to the Earth (us), no peaking influences.

Tuesday, March 27
Jupiter steps back into sidereal Libra until next October, the effects are lighter, more cordial, perhaps excessively so.  Relationships and interactions may take on a slightly more adventurous tone.

Thursday, March 29
Endeavors may run into snags, delays and frustrating obstacles.  The problem may lie simply in your inability, inhibition, or disinclination to adjust yourself to changes.  (Sun square Saturn)

Saturday, March 31, Full Moon
Illumined by the reflected sunlight of the Moon, we’re ushered into April.