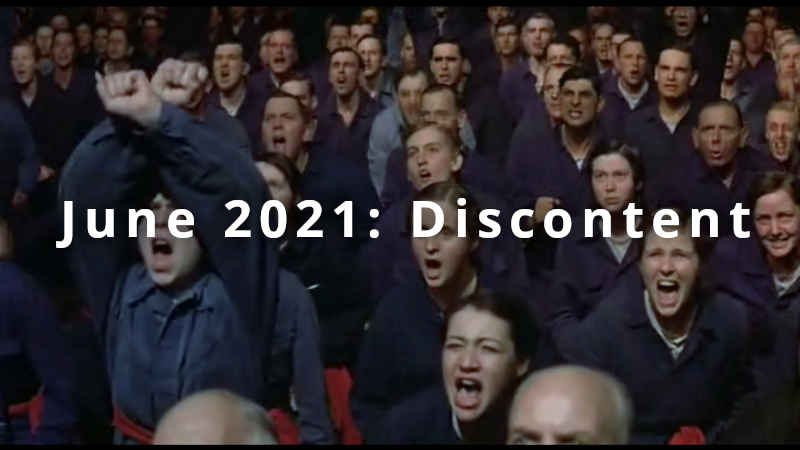 There will be a very powerful fifteen-day period from June 10 to 25, which should have a strongly stimulating effect on human and world affairs.

The most central of these configurations is the square of Saturn and Uranus taking place on Monday, June 14.  This is the archtypical battle between the old and the new; with the “new” trying to throw everything off the rails and the “old” struggling to maintain their hold on things.

Discontent rises as humanity turns another evolutionary corner, but it doesn’t need to be a fight.  We can all recognize the need to embrace change, throw off fears, and take that new uncertain road that we all seem to be swiftly moving onto.

We also have the turning of the seasons as light now starts to either increase or decrease with the solstices, depending on which hemisphere you reside on.

That is a lot of figurative stones thrown in the pond making interacting ripples in the waters of the collective human consciousness.

I find it quite interesting now that there is a remarkable focus in the news about UFO’s, with the government basically saying they are real.  It’s a pretty significant mind shift for any one, and thus the astrology underscores it.

Tuesday, June 1
Connecting is not as easy some days, many biases and oppositions to overcome.  But the harder the overcoming, the greater the rewards.  Be careful of corrupt elements or motives effecting behaviors.  (Venus sesquiquadrate Saturn, Sun sesquiquadrate Pluto)

Wednesday, June 2
Last Quarter Moon
Not a day to relax, one needs to be ready to seize opportunities as they fly past you.  Surprising and/or disrupting developments, also be careful of accidents and/or injuries.  (Mars quintile Uranus)

Sunday, June 13
Directness and honor in actions may be harder to manifest than usual, behavioral and physical dysfunctions indicated.  Enough sleep and eating the right things can help, etc.  Be careful starting things today that you know will be a problem down the road anyway.  (Sun square Neptune, Venus quincunx Saturn, Venus sextile Uranus, Moon opposite Pluto and conjunct Mars)

Monday, June 14
Stresses and strains of keeping things together may seem very acute.  Hold on, it’s a pivotal time.  Be the hero that delivers something bold, new and effective.  (Saturn square Uranus, Mars quincunx Jupiter)

Tuesday, June 15
With the Moon in sidereal Leo applying to conjunction with Regulus, Mercury aspecting Mars, the Lion roars loudly at perceived threats; but sometimes we roar out of fear more than anything else.  (Mercury semisquare Mars)

Friday, June 18
First Quarter Moon
What a sticky wicket we find ourselves in.  Progress may be impeded until the inconveniences are dealt with.  Turn crabbiness into resolute determined corrective action.  Love and happiness nevertheless is fated to succeed.   (Sun sesquiquadrate Saturn, Venus biquintile Juno)

Sunday, June 20
Jupiter Stationary Retrograde
With Jupiter literally standing still in the sky today, turnabouts in ideas, spirituality and life-direction are possible.  The exalted excitement you may feel today may skew your thinking into overly optimistic scenarios, but dreams motivate and inspire us.

Monday, June 21
Summer/Winter Solstice
It is the longest day of the year in the Northern Hemisphere, shortest day for the Southern Hemisphere. Daylight is a zero-sum game on Earth, the South’s gain is our loss, now that days start to get longer for them and now shorter for us in the North.  Relationships and feelings today are softly illuminated by universal love, uplifting all everywhere.  (Venus trine Neptune)

Tuesday, June 22
Mercury Stationary Direct
Ideation, reason, logic and perception are accentuated.  It all starts in the mind, the goal, the plan and the execution.  Seeing and being are not far apart.  Of course, it’s always in the doing that we seem to fall short the most.  It is Mercury, or Hermes, if you will, who accomplishes it in the “twinkling of the eye”.  Hermes lives in all of us, therefore the same is possible within you.

Thursday, June 24
Full Moon
Intent and action today can have problematical foundations and may go totally awry.  Militantism today can be at it’s worst manifestation, beware.  Getting oneself up for anything can also be problematical, dysfunctionality so prevalent now. All of these affect relationships as well today. (Mars sesquiquadrate Neptune, Venus sesquiquadrate Juno)

Friday, June 25
Neptune Stationary Retrograde
Dysfunctionality, deceit and self-deceit are the obstacles of the week; all peaking today.  Will-power, but also humility are the keys to success right now, sometimes making the choice NOT to act.  Don’t accept things at “face value” now, deception and illusion likely are involved.

Sunday, June 27
Nothing good is every usually free. The price is less material as it is choosing emotional maturity, balance and honor in our affairs; “letting go” of our former lesser ways.  (Sun biquintile Saturn)

Monday, June 28
The Moon and Venus aspecting Jupiter should bring delight and excitement to parts of the day.  The Moon also on Regulus star, the Heart of Leo the Lion constellation, can bring audacity and courage, as well as possibly some recklessness.  (Venus quincunx Jupiter, Moon conjunct Jupiter)

Tuesday, June 29
People gather together with energy and purpose, let it happen.  Sometimes things feel “right”, that balance of reality and opportunity, such as with today.  (Mars trine Juno, Mercury semisquare Venus)

Wednesday, June 30
Especially in the Western Hemisphere some excess “floatiness” may hamper affairs in the morning.  Take a deep breath, reassert and re-integrate with reality and the environment.  For others it will be more afternoon-evening.  Amazing creativity and perception may be possible today.  (Moon conjunct Neptune)

More dates to be added