Right over the midpoint of the month, we should see some significant developments.  Over the weekend of the 14th and 15th, we will be having a very-Mercury time of things of insights, realizations and turns with Mercury stationary retrograde and then perihelion (closest to the Sun). 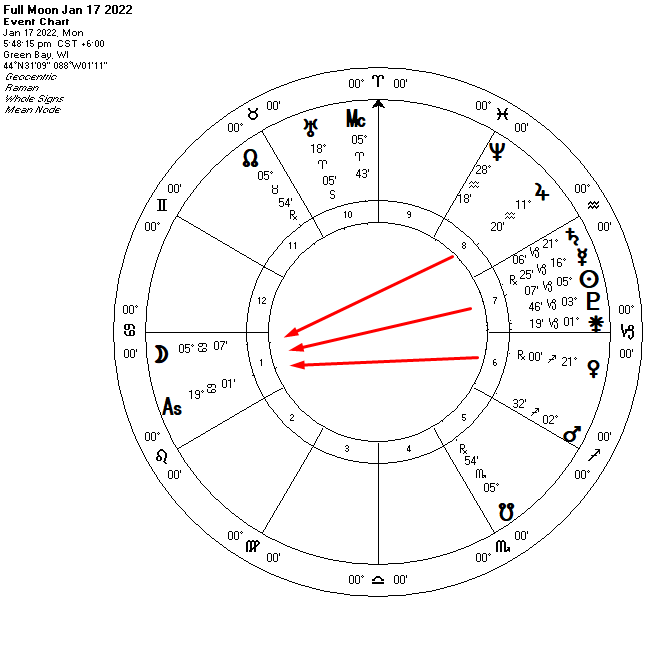 The full moon of January is quite interesting as the luminous Moon will be opposed by Pluto, Saturn and Mercury (and of course, the Sun, which is why it is a full moon), and the Moon will be a the apex of a type of “yod” formation as Venus, Mars, Jupiter and Neptune lie at the sixth and eighth houses from the Moon.  January seems to be astrologically laden with potential and possibilities for changes.

This will be followed by Uranus turning stationary direct on Tuesday, Jan 18, while Mars makes a sesquiquadrate aspect to it; this could be a very impactful shift or turn in affairs on a personal as well as collective global level.

Two days later, keeping the momentum going, Mars then moves into conjunction with the Galactic Center, which I’m guessing will fuel much more drive to make something good of the previous astrological events outlined above.

A couple of days after that, Jan 23rd, Mars makes semisquare to Saturn, which may bring out the inevitable backlash or deep resistance to change, possibly having to do with something we refuse to give up in order to gain something better; prideful stubbornness.

On the same day, however, it will also be a very Mercury-Venus type of day with lot of interactions and pleasantries, as Venus is at perihelion and Mercury forms inferior conjunction with the Sun.

About a week later, on January 29, Venus itself turns stationary direct after having spent months moving backwards apparently in the sky, most likely giving our interactional and emotional selves a good boost.

Sunday, Jan 2
New Moon
Later in the day, before midnight US time, closeness and intimacy is accentuated.  (Moon conjunct Juno)

Tuesday, Jan 4
Earth at Perihelion
Serious and meaningful as the Moon conjuncts Saturn.  Today the Earth is at it’s closest arc to the Sun, feel the heat?

Thursday, Jan 6
Epiphany (The Visitation of the Three Kings to Christ)
Situations may seem to get out of hand easily, based on false perceptions or assumptions.  Strive to be the calm center of the potential storm. Powerful love and relationship developments.  (Mars biquintile Uranus, Mercury semisquare Neptune, Sun semisquare Jupiter, Venus conjunct Juno)

Friday, Jan 7
Mercury at Greatest Elongation
Thoughts, realizations and perceptions are accentuated, but be careful of the tendency to embellish towards bias in what we say or do.  (Moon conjunct Neptune)

Friday, Jan 14
Orthodox New Year
Mercury Stationary Retrograde
Moon at Apogee
A surge of activity and new connections forming, which later in the day may motivate new developments.  Mercury is now retrograde for the next few weeks, which traditionally is not good for agreements and new initiatives, but realistically only means a greater level of scrutiny is required in mundane affairs.  (Juno tridecile Uranus, Moon opposite Mars)

Saturday, Jan 15
Mercury at Perihelion (closest to the Sun)
Brilliance of ideas, but which may take some diligence to fully flesh out as Mercury is also retrograde.  The Moon opposite the Galactic Center, would seem to connect us up with the greater galactic community???

Sunday, Jan 16
The base abuse of power is revealed, as arresting and charismatic as it may be.  Urgency can overwhelm perspective, slow down a bit before you act.  Harmony and love is enhanced with the Moon opposite Venus, but sometimes we may look for in others which would should first find internally.  (Sun conjunct Pluto, Mercury semisquare Mars)

Monday, Jan 17
Martin Luthor King Jr Day (US)
Tu Bishvat (Jewish “New Year of Trees”)
Full Moon
The next few weeks may be pivotal to a degree, as this full moon is opposed by Pluto, as well as Mercury, Saturn, and Juno; as well as receiving a “yod” from the sixth and eighth houses from it from four other planets.

Tuesday, Jan 18
Uranus Stationary Direct
Another powerful day for new developments with the potential to launch exciting endeavors.  Excitement/stress levels can be quite sudden and high, but sometimes that’s the way it needs to be.  (Jupiter conjunct Fomalhaut star, Mars sesquiquadrate Uranus)

Wednesday, Jan 19
Early on the Moon opposes Saturn, which may bring a serious, but significant, cast to the day.

Thursday, Jan 20
Mars conjunct Galactic Center
Take initiative, whether you feel “ready” or not.  As it is said, fortune favors the bold. Fluid reality can bend to your will.  (Moon opposite Jupiter, conjunct Regulus star, Mercury semisquare Neptune)

Friday, Jan 21
Later in the day, as the Moon opposes Neptune.  Let feelings speak to you, instead of the skeptical bias of the mind.

Saturday, Jan 22
In evening, US time, the Moon moves into conjunction with the Super Galactic Center. Reconnect with your center of all centers, manifest purpose.

Monday, Jan 24
The urge to merge with Juno and Pluto conjunct.  The Moon on Spica and Arcturus stars gives good fortune in all matters.

Wednesday, Jan 26
Get real!  What you think is true may be so, so wrong, especially about yourself. Better to be humble than humbled.  Energy and motivation may seem hard to access, don’t choke. Moon opposite Algol bring shocks (7:37 pm CST). (Sun semisquare Neptune)

Saturday, Jan 29
Venus Stationary Direct
The Moon moves across Mars and Venus today as Venus itself switches direction in the sky.  Strong relationship and love developments. Learn the fine dance of love, how it lies somewhere in between desire and beauty.

Sunday, Jan 30
Moon at Perigee
Seize the initiative.  Use surprise to your favor.  No hesitation.  (Sun square Uranus, Moon conjunct Mercury and Pluto)