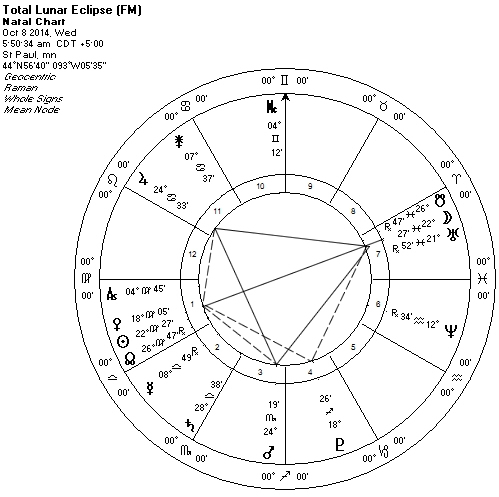 Skip directly to the day by day readings

There are rather unusual alignments of the planets this two week period: a somewhat rare grand trine of Mars, Jupiter and Uranus; which by nature will be very exciting and inaugurating of positive developments.

At the same time there will be a lunar eclipse that will exactly bi-sect that grand trine.  Eclipses always add a very fateful and poignant flavor to events, but I should add that two legs of this grand trine, Mars and Jupiter, will be in the signs of the rulership and exaltation.  I am using the sidereal zodiac of Vedic astrology.

During this time Mercury will also do its regular retrograde station, hitting the brakes and turning into reverse gear.  Traditionally, this 21 day period one should avoid making important business decisions, signing papers, and so forth.  With Mercury symbolizing cognitive functions in a “skewed” or “backward” position, this reflects on a supposedly skewed, backward, or faulty decision- or perception-making state of mind; and hence the increased possibility for things to go wrong.

There are also a few powerful alignments of Saturn biquintile Uranus (Oct 2)  and Jupiter biquintile Pluto (Oct 7), both producing significant reverberations throughout the planetary collective consciousness.  Jupiter-Pluto configurations have to do with ideologies and broad uses (or mis-uses) of power.  Saturn-Uranus configurations have to do with transitions and breaking out of old paradigms, which can be a somewhat stressful process.

Take note of the situations in:
•    The Ukraine and Russia
•    Syria with ISIS
•    Ebola in Liberia
•    Earthquake swarms and volcanoes erupting
•    The aftermath of the apparently rigged Scotland referendum
•    Riots in Hong Kong
•    Israel and Palestine

Wars have definitely expanded their scope in a relatively short time period.  This is on the heels of the recent Mars-Neptune square of September 21, 2014, which in a nutshell indicates strife (wars) based on flimsy, unethical assumptions and downright deceit on the part of leaders.

Wars usually need a lot of “help” via the media to sell it to the world.  Humanity is basically a peaceful, loving, and spiritually-oriented group; and they need to be tricked, or sold a bill of goods, to support the aims of a much smaller group of grasping, greedy, and powerful individuals situated at the top who basically use wars and economic leverage to achieve their ends.  These are the banking and financial industries headquartered in Wall Street, London and other places.

The Ukraine situation and the situation with Iraq, Syria and the so-called ISIS group are cases in point.

In the Ukraine the West has been funding and supporting extreme right wing groups, which lead to the ouster of the democratically elected President of the Ukraine, Viktor Yanukovych, for the current president Petro Poroshenko.  The Western forces (the European Union, NATO, US, Britain, and Mossad) are vying a proxy war against Russia, seeking to cut off their gas and oil pipeline routes which produce economic inflows to their nation.

It’s a war of propaganda as much as it’s a hot military war through Western forces media and rhetoric, trying to paint Russian President Putin as the next Hitler.  Ironically, the Russian leader has shown remarkable restraint recently, heading off a war in Syria in 2013 and then not invading or attacking the Ukraine when it is clear that he could have.

The same goes with Syria and ISIS.  Syria is the last defense wall of Iran, which the Western forces have wanted to go to war with for a long time now, and which also is in the orbit of Russia.  The US, NATO, Arab States, Britain and the entire European Union has been actively funding, training, and arming the militant Islam forces which have now recently come under the umbrella of ISIS.

The US and its allies now have to fight ISIS because they have become some sort of threat suddenly (again through manipulation of perceptions in the press with beheadings, etc.), but in the process they get to blow up a lot of Syria’s infrastructure and making inroads against their government.  Killing two birds with one stone, as it were.  President Obama claims to have underestimated ISIS and now he much go to war therefore, but that seems rather far-fetched since we created them in the first place.

The point is, there would be no war if it weren’t for an obviously pre-laid-out campaign of supporting, funding and arming terrorist groups (who otherwise would be no threat) and using lies and manipulation of facts to fabricate a rationale to have to go there now and fight them; spending billions and billions of dollars on war material in the process.

Some may disagree with my conclusions, but an objective look at the situation makes it all pretty clear to anyone; and this is certainly not the place to hash out all the pros and cons of the matter, as there are plenty of places on the Web to do so; Globalresearch.ca for one.

Along with the other hot spot mentioned above, this upcoming eclipse may signal some changes in the winds, actual fighting by ground forces (US and allied troops), sea and air battles, with the US government battening down the hatches in more war-posturing.

I like to think that the water grand trine (sidereal zodiac) with exalted planets will simultaneously help bring about more peaceful, enlightened and hopeful outcomes.  Maybe the world will come to its senses in greater and greater measure; helping to precipitate a revolution for greater self-determination instead of rule by the few from afar (as is the case in the European Union.)  The recent Scotland referendum, supposedly already decided as “no”, may resurge from many examples of vote fraud being brought to light.  The Hong Kong riots recently have a similar basis to them, albeit those have earmarks of being another staged “color” revolution of US CIA fame.

Freedom is indeed a power to be reckoned with.  The upcoming Mars-Jupiter-Uranus grand trine may show us just how.

Thursday, Oct 2
Tension preceding change may characterize the day.  Energies may need to be modulated, modified, or moderated before long term adjustments are made, requiring a little trial and error.  (Saturn biquintile Uranus)

Friday, Oct 3
Emotions, love and sentiments in general may take on unrealistic or fanciful dimensions, which may bring disappointment after a time.  (Venus quincunx Neptune)

Saturday, Oct 4, Mercury Retrograde
Diverse and interesting day at hand.  Breakdowns and significant turns may been seen in relationships and in life events in general.  Power and the will may be subject to misuse, cruelty.  A sense of detached bliss may overshadow all, giving one pause to consider if they are really “here” or not.  Daily life may suffer disruptions, and plans going awry.  Don’t sign any important documents or make significant decisions during this 21 day period of Mercury retrograde; but if you have to anyway, strive to figure out any problems that may arise from your decisions beforehand, and prepare for them.  Excitement may elicit premature actions.  (Sun square Pluto, Venus semisquare Saturn, Sun biquintile Neptune, Mars trine Uranus) 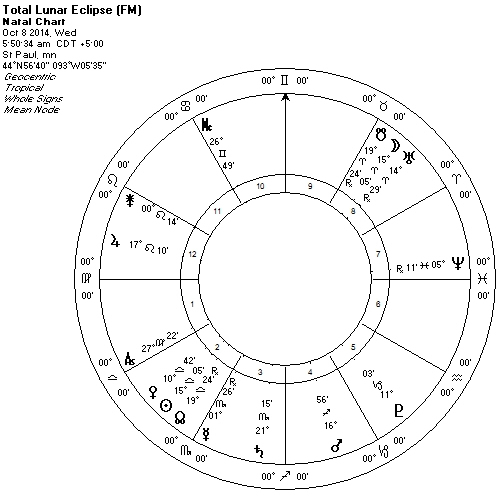 Tuesday, Oct 7
It may be hard to contain oneself right now, but it still would be a wise move.  The tendency for things to get out of control is imminent, and there is no guarantee that things will go as expected.  Creativity, spirituality and the sense of personal power may manifest in very powerful and infectious ways.  Seek to honor ethics and wisdom.  (Jupiter biquintile Pluto, Sun opposite Uranus, Mercury semisquare Mars)

Wednesday, Oct 8, Full Moon Lunar Eclipse
Life may seem to take an unearthly turn today.  You may feel quite out disembodied in some ways.  Yet feelings and passion may run strong and deep, opening the way for new life developments.  Move forward, even if your feet feel unsure of themselves.  (Mars trine Jupiter, Venus square Pluto, Venus biquintile Neptune)

Friday, Oct 10
Boldness and daring may characterize the day, calling out something in you which may be dormant or suppressed.  Let it out, you may save the day.  Creative, spiritual and philosophical issues will be highlighted.  (Sun sextile Jupiter)

Saturday, Oct 11
Relationships may undergo stresses, opening up the way to needed flexibility.  Deep and profound issues may captivate discussion and debate, allowing powerful solution-oriented investigation.  Creativity and spirituality will be highlighted.  (Venus opposite Uranus, Mercury quintile Jupiter and Pluto)

Sunday, Oct 12
Significant group and individual developments are imminent.  Behind seeming hardship or tragedy will be found the deepest of life issues, which you need to become cognizant of, especially now.  The abuse of power experienced now may be a reflection of your own past misdeeds, now seeking a spiritual sort of redemption.  (Sun conjunct Node)

Monday, Oct 13
Motivation and energy may seem to be in short supply, but we can’t always get what we want.  What we want is not necessarily what we need, which is definitely a challenge to the ego.  Trying to find energy may be the whole problem, especially when the “I” that is trying to find energy may be in actuality a rather nebulous and illusory thing.  Just acting from a higher, more intuitive impulse may reveal heretofore hidden sources of strength and power.  (Sun sesquiquadrate Neptune)