The Astrology of Bernie Sanders: Victory in 2016? 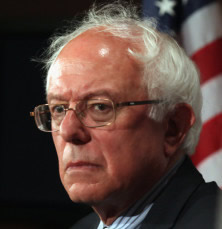 Bernie Sanders has a intelligent and compassionate horoscope.  He’s a shaker, a noble sort of agitator for justice.  He’s positioned for success in life, but he may have detractors, some of those calling him a “dreamer.”  But he could be his own worst enemy.

With the Sun in Leo in the third house and with Mars in Aries in the eleventh house, Sanders definitely is a passionate go-getter for his causes, and not afraid to call out the enemy.  He can also be very generous and kindly and with the Moon in Pisces in the tenth house, he could very well be called an idealist or a “dreamer.”  The Moon in Capricorn navamsha however gives added skepticism and toughness to actualize his dreams.

Rahu (the Moon’s North Node) in the same house of the Sun can give him further ambition and ability to rise to the top in life.  Bernie has enjoyed a long career in government, which by nature is “on top.” 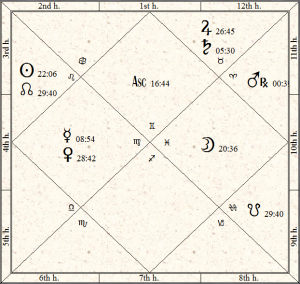 With the ruler of the tenth house (Jupiter) in the twelfth house, and disposing his Moon in Pisces in the tenth, he may have powerful detractors.  He does not enjoy the praise or acclaim as, say a Hillary Clinton, but suffers an automatic sort of marginalization in the press.  He may accede to the will of others regarding his outcomes.

However, by nature the Moon in the tenth house indicates a more grass-roots, feelings connection to the people en mass, which he definitely enjoys and has served his campaign well.

With the Sun in the third house squaring Jupiter in the twelfth, he may be perpetually at odds with philosophy over authority.

Being Gemini rising with Mercury in Virgo, he is quite intelligent, a good communicator and in command of the details.  He is also double raja yoga (“king making”) with Mercury’s position as well as Venus in the fourth ruling the fifth house.

The trine of Mercury to Saturn gives calmness to his demeanor as well as command of the facts.  The trine of Venus to Jupiter helps to ennoble his spirit and give him the edge over his competitors and detractors. 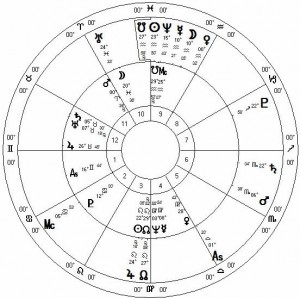 Like Donald Trump, Bernie Sanders is riding high with Jupiter in his astrology.  Jupiter is currently in proximity to his Sun and North Node, as is the transiting North Node; and then will move into the same house as his chart ruler, Mercury and directly aspect his Moon in the tenth house.  Jupiter will also be trining itself for the whole period.

This indicates a strong wind at his back metaphorically until about summer of 2017.  This is definitely a good thing to have while one is campaigning for office.  Despite the best efforts of the mainstream press, he still has very strong popular support on the campaign trail.  His message of social and economic justice resonates with a middle class populace that has been through hard times and diminishing hopes.  He’s more detailed with his platform and speech delivery than the sloganizing glibness of Hillary Clinton or Donald Trump, he has a lot of factual weight behind him.

Transiting Saturn is in opposition to his natal Jupiter and Saturn, which is not making his road any easier.  However the grueling 2 year quest to become President is never easy and will take its toll.

Transiting Uranus in now moving inside of the ten degree space between his Moon and Mars at the top of his chart; he is definitely in the mode and means of trying to shake things up, and he will continue to be so for a few years to come at least.

During this run up to the election transiting Uranus will also be sextiling his Jupiter, it could blow the winds of fortune in his favor, but does it equal the political might of a Hillary Clinton, Donald Trump or whoever else?  Not so in my opinion.

Transiting Neptune and Pluto are not currently making an significant aspects for the election cycle right now for Sanders. 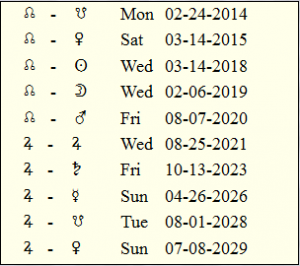 According to his Vedic dasas, he is in the middle of a three year Venus sub-dasa.  This gives him warmth and favorable recognition by the public, as well as some good fortune as well.  Venus rules the tenth house from the Sun in his chart, indicating public recognition, and this influence will be in force through March of 2018.

In March of 2018 He enters a 13 month Sun sub-dasa, this would indicate a time of prominence, authority and success in his life, but that does not coincide with the inauguration of January 2017.

He may enter into a period of increased responsibility and power in his current senatorial career, being more vocal and strident for his causes.

If he were to be elected this may be a peak period in his term, and problematical in some ways with the square to Jupiter.

Astrology: Will Bernie Sanders Be Elected?

Elections are not won simply by the popular vote.  It’s a fairly complicated affair with the popular vote in November determining electors in the Electoral College, who then actually elect the President by a vote the following January.

The electors are in no way held to the results of their representative areas, they can always choose someone else for party or other expedient or convenient reasons.  It doesn’t seem right, but the writers of the Constitution saw it fit that the office of President is not held hostage to the fickle whims and uneducated passions of the populace.  We’re not a democracy, it’s a republic.

Right now Hillary Clinton has about a two to one advantage in delegates over Sanders, and she also has the contingent of super delegates who are even more autonomous in finally selecting the Democratic nominee.

At this moment I don’t know exactly what the astrology of Hillary Clinton is compared to Bernie Sanders, but she seems to have a decided advantage built into her campaign.  She’s a mainstream Democrat, and the Democrats have ceased to be any kind of “people’s” party long ago.  She is more in line with their corporatist and banking-class agenda.  Sanders is riding a wave of popular support because of the increasing economic injustices  of the aforementioned elite classes upon the populace; but it is almost assured that he will not ultimately get the party support.

Even if he were elected he would be arrayed against an entire Congress of corporate-owned politicians, not to mention most likely having a cabinet of big business figures who are in that ever-revolving door between corporations and government.  I don’t think so.  The astrology has to subordinate to the other considerations in the election.

Note: I am using the rectified birth time determined by Edith Hathaway for Bernie Sanders, which is September 8, 1941, 1:05 am, New York, NY, with the Lahiri ayanamsha.  There is no official published birthtime for Sanders, as per Astro.com, but there are a number of rectifications by different astrologers with varying birthtimes, but Edith Hathaway’s seems to work best for me.  CB