Think of them as energetic gateways to new areas of personal expression and development.  There may be a figure at the gate asking for a fee for entrance: pay a little karma, live through a little self-created thunderstorm of emotional crisis, or quickly finish all your old business to clear the way for a new push.

So many times we all go through a little 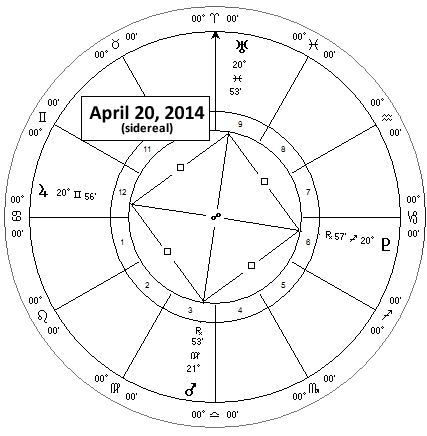 period of unsettled transition of varying degrees during astrological peak points like these.  The fact that these are the hard aspects (squares and oppositions) does not necessarily mean that they are “bad”, but the acuteness of the angles underscores the level of impact that they bring on our lives, delivering the necessary “shock” to get things moving which might have become a little too comfortable in their ways.

The planets in astrology represent forces of change, a literal pantheon of gods and goddesses that embody archetypal concepts and primordial forces that act in our psyches, all of which we have little or no control over.  Their interactions in the skies above us mirror exactly the interplays of forces acting in our earthly lives, minds, and feelings.  The Hermetic Axiom simply states “As above, so below.”

We may not be able to alter the courses of the planets in the heavens, but we certainly can control the ways we work and ultimately benefit from the movements of the planets upon us.  This way we transcend our astrology and its limitations over us; i.e. we are not any one point in our charts, we are an unattached, unconditioned point of light and consciousness at the center of the chart, observing the interplay of the lesser gods in a state of eternal bliss.

Almost all of the outer planets are activated at once in this grand square configuration, so its effects are going to be pretty all encompassing upon us, individually and collectively.  Forces of control without (active in the world) crash against forces of self-control (Mars), liberation (Uranus), power (Pluto), and enlightenment (Jupiter) within.

What will happen?  I predict that the headlines may scream for a little bit, and that the intensity of emotions acting en masse may help to move things along, but the program has already been set, and those in positions of power will be able to capitalize on this key astrological moment.

The same goes for you, the program has already been set (whether it’s by commission or omission), what will come about will be directly proportional to the intensity of you intensions and your actions to make sure that program comes about with this tremendous boost from the Universe.

Tuesday, April 22
Ideas and philosophies may be debated with passion, but debate may devolve into a battle for intellectual supremacy.  Impatience and intolerance may run strong, and actions taken now may soon lose their steam due to faulty motivations.  (Mars square Jupiter)

Wednesday, April 23
Reactionary radicalism may clash with deeply set tendencies to intimidate, coerce, or to dominate.  Be careful of events and situations going awry, and their resounding effects shaking us to our core.  Stay out of danger zones if possible.  Keep a steady course through turbulent waters.  (Mars opposite Uranus, square Pluto)

Thursday, April 24
Actions may stem from murky and least-understood motivations resulting in questionable results.  Be aware of the potential in situations to bring out self-deceptive or co-dependent behaviors.  Act from your highest ideals.  Energy and vitality may come and go. (Mars biquintile Neptune)

(April 26 to 28 very minor aspects, not posted due to time constraints)

Tuesday, April 29, Solar Eclipse
The Moon comes into very close proximity (per the naked eye) to the Sun early today. A solar eclipse, which can be thought of as a particularly significant new moon. Since the Sun represents our spirit, and the Moon our mind (especially according to the Vedic sense) we can think of this as a “two merging into one” and transcending into something distinctly new. When something new appears, there is always a period of adjustment and uncertainty, which can correspond to the usual disorientation that can be observed during eclipses. It can be a particularly spiritually experiential time. Mercury trining Pluto today also contributes to increased depth of understandings possible as well as the potential power of messages that can be delivered today.

Wednesday, April 30
Social and learning/analytical situations are favored early on, be careful of spending precious resources (time, energy, and funds) on situations ultimately frivolous. Also be careful of your enthusiasm adding unwarranted merit to something which you are discussing, investigating, or otherwise acting upon. (Venus tridecile Jupiter, Mercury sextile Jupiter)

Thursday, May 1
Urgency, expedience and impatience are the bywords of the day. Be careful that haste does not make waste, injury or worse. The potential for things to go awry today and tomorrow are increased. Relationships will benefit from mind-expanding, border-extending activities such as spiritual or cultural discussions or events; but be careful of too many promises and too little results. (Sun quincunx Mars, Juno quintile Jupiter)

Friday, May 2
Getting eye to eye on matters may be frustratingly difficult, but the effort to get everyone on the same page will be worth it. Be careful of giving power to self-defeating ideas and mindsets or the belief that some things are just not possible. However, these configurations will be a definite opportunity to get past self-created limitation, especially through intuitive or compassionate solutions. (Mercury opposite Saturn, quintile Neptune)

Saturday, May 3
It may feel deceptively easy to fall into habits or activities that deliver intense and pushing-the-envelope benefits, and the sense of conscientiousness may get drowned out. The ego (Sun) gets a tremendous, but questionably truthful boost (Pluto.) (Sun trine Pluto)

Sunday, May 4
No peaking influences

Monday, May 5
Early on, urgency that borders onto hysteria may be a situation to be dealt with. (Mercury sesquiquadrate Mars)

Tuesday, May 6
Creative tension may be acutely experienced, factors of control/repression coming against liberated soul-expression catapulting consciousness to a new level and activity.  Be careful of flashpoints and situations liable for accident, injury or worse.  Obsessive tendencies are highlighted, but at the same time deep insight to our various psychologies.  (Saturn biquintile Uranus, Sun biquintile Mars, Mercury sesquiquadrate Pluto)

Thursday, May 8
No peaking influences