April 2018: Mars Triple Stellium, What Ships are Built For

There is quite a bit happening this month, so I’ve created a brief rundown of the major dates, with more information down the page in both the intro and then day by day section. 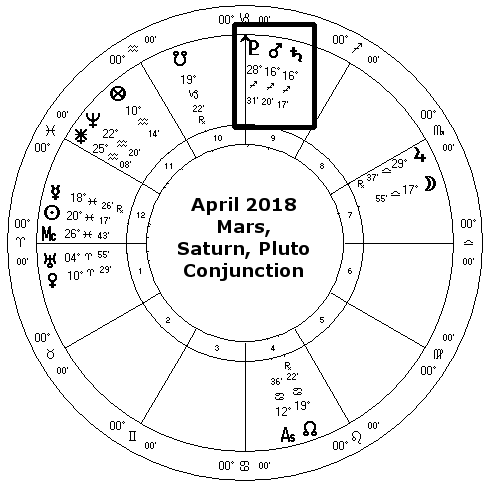 There is going to be a certain intensity to April 2018 this year as Mars makes a close pass to Saturn and Pluto in sidereal Sagittarius.  Especially around the dates April 2, 3, 17, 22 and 26. See the chart posted below.

Using Ebertin’s Combination of Stellar Influences, this combination is described as “brutality, assault or violence, ruthlessness” as well as “the necessity to fight for one’s existence or life; maltreatment”.

Basically, we’re talking about the direct application and direction of force, whether it’s for survival or the survival of important endeavors.  According to your various rising signs (Vedically measured), this triple conjunction (also called a stellium) is going to mean different things.  For more info on that and your specific Vedic risings, Sun , or Moon sign, refer to my free ebook “Discover 2018: Astrology for all the Signs” (click the book image). 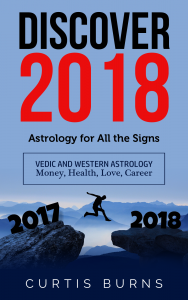 Notice also that Saturn is at the peak of its aphelion phase, in which it is at the furthest distance from the Sun in it’s entire 29-year orbital period.  During aphelion and perihelion phases, the effects of the planets seem to manifest themselves noticeably.

Later in the month, Mars will be moving rather close to Pluto just as it becomes stationary, so the entire week of April 22 looks to potentially very intense.

As of April 17, there will be three outer planets in retrograde.  Some people think this is cause for concern.  In my opinion, you should not have to worry about it.  Just live your life and do the best you can when you can.  Whether a planet is retrograde or not, merely means that the areas of life that that planet rules are going to be slightly more difficult to manifest. 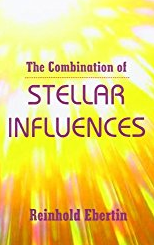 Just like when you set a course on a ship, you can’t let the winds determine whether you are going to go out or not, it just means that your ways of getting to your destination may require a bit more adjusting of your sails for.

Now when there’s a hurricane incoming, well then, I would say stay in the harbor.

I’ve noticed time and again that severe weather does coincide with intense astrology such as Mars-Saturn-Pluto above; especially symbolizing the tension and then the catastrophic losses that will occur; but not every time.

So, if you have to go, then go.  But like you, I’ve had my share of situations where I “had” to be somewhere, such as a work situation, and the weather was not good at all, especially in the icy winter storms we can have here in Wisconsin.  But I would make it, seemingly delivered by angels themselves.

So, don’t let a retrograde planet spoil your planets.  Life’s an adventure.  To completely avoid risk is to never leave the bed.

Monday, April 2, Mars conjunct Saturn
Force contained, intention thwarted.  Now is not the time to move, there are other things you need to address and act on first.  Relationships may require adjustments to be made.  (Venus sesquiquadrate Juno)

Tuesday, April 3, Saturn at Aphelion
Today Saturn reaches its maximum distance from the Sun in its twenty-nine orbit around it.  With Mars and Uranus in tridecile aspect today also, this could be a pivotal day for those who act when prompted and have the courage to directly face issues.

Wednesday, April 4
Moments of urgency, anxiety or panic may create mountains out of molehills; but while others are freaking out, you can act calmly and decisively.  (Mercury square Mars)

Saturday, April 14
Boldness and confidence bring us to riskier spaces, with best results walking that thin ethical line.  Be careful when anger is somehow seen as a manifestation of God.  (Jupiter sextile Pluto, Mars sextile Neptune)

Sunday, April 15, Mercury Stationary Direct
Brilliance and precision as the mind, attention and thought come alive.  Mercury once again is moving forward through the zodiac.

Tuesday, April 17, Saturn Stationary Retrograde
Very interesting day for relationships, but also for accountability and integrity.  Difficulties, obstacles and intense emotional resistance occupy attention, but remaining calm at the center can help you to get where you need to be today.  Relationship situations may seem to offer much, but hidden agendas are most certainly attached.  (Sun tridecile Saturn, Venus opposite Jupiter, Venus trine Pluto)

Wednesday, April 18, Sun conjunct Uranus
The Earth, the Sun and Uranus line up today.  Knock those limiting walls down, you cannot be contained by someone else’s view of things, ideas, or controls.  Add your unique talents to the universal store.

Friday, April 20, Moon at Perigee 2:44 pm GMT
Vitality and energy at low points may bring about misfortunate outcomes.  Don’t give in to a despairing outlook that affects your outputs.  Remember integrity and honor.  (Sun semisquare Neptune)

Sunday, April 22, Pluto Stationary Retrograde, Lyrid Meteor Shower, First Quarter Moon
Around midnight, look up in the sky to see steaking lights, and as Pluto becomes stationary today the depths of emotions may be experienced through developing situations and life experiences.  Before the new can manifest, the old must be discarded or finally break away.  Love and beauty may touch the soul, giving sublime delight in the unfolding of destiny.  (Venus sextile Juno, Venus quintile Neptune)

Wednesday, April 25
Don’t let temporary problems or setbacks kill your ardour, as monumental as they may seem.  Getting the message out or through experiences resistance, with probable lessons learned on both sides of the message.  (Mercury square Saturn)

Thursday, April 26, Mars conjunct Pluto
Go for it.  Be careful, however, that you don’t wreck your engine going full speed.  Ramp it up carefully.  Rome wasn’t built in just one Mars-conjunct-Pluto day, although some might think it so.  As always, the longer and more sustained the practice, the better this transit will be.  For those who live lives of “quiet desperation” the energies may come out too hard too fast, resulting in unplanned and unforeseen consequences, making possibly an interesting, if not traumatic, day.  Remember that everything you experience and everyone you encounter becomes a mirror of the contents of your psyche, owned or un-owned by you.

Sunday, April 29, Mercury at Greatest Eastern/Evening Elongation
As Mercury reaches maximum distance from the Sun, as observed from the Earth, thoughts and activities may reach an energetic peak, but which may help you to manifest good and practical solutions to life problems.  Nevertheless, the feeling of walking a tightrope over troubled waters may continue.  (Sun trine Saturn, Sun tridecile Pluto, Venus sesquiquadrate Pluto)