US Astrology Chart : Destiny of the Nation

This is an interpretation of the chart of the USA (July 4, 1776 and 5:12 pm LMT in Philadelphia, Pa) using the sidereal zodiac and Vedic astrology rules of interpretation.  In my personal research, this is the chart that has yielded the best results for natal and predictive info.

This is the chart of the definitive “birth” of the nation, moment of the signing of the Declaration of Independence.

Appropriately enough declarations/communications are highly emphasized and favored in this chart. There are four planets in Gemini, the sign of the communicator, as well as that of ideation and perception.  The disposing planet of the Gemini stellium (two or more planets in a sign) is Mercury which is in the ninth house in Cancer, conjunct the North Node, Rahu. 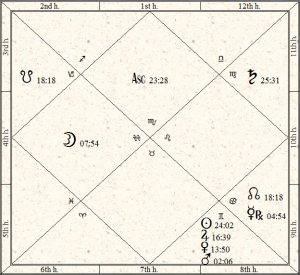 Ideation is translated to feelings and sentiments, especially that of the land itself, or the group consciousness of the nation, which is also called patriotism.  There is a feeling of bonding and togetherness, as well as happiness.

Mercury disposing the Gemini stellium and falling in the ninth house of spirituality and higher ideals, there is an exalted or almost elitist self-attitude attached to the sense of national self-identity.  Religious and spiritual values are strongly associated to its sense of destiny or fulfillment, as well as metaphysical or secretive notions.

Four planets in the eighth house disposed by the ninth house is a very powerful configuration with the potential to swing to extremes on the good or the bad side.  One might say that the spirit of the US was born in fire, as in what lead up to the American Revolution; but also it may end in fire; the fire of chaos and destruction, or the fire that the phoenix arises from at the end of an intensely spiritual (or some would call it alchemical) process.

Middle grounds will not work, it is going to be all good or all “bad.” 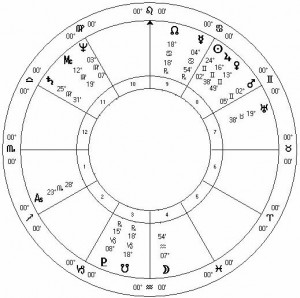 Saturn from the eleventh house of group awareness, social mores, and good fortune, makes Vedic tenth house aspect  on the Gemini stellium in the eighth house.  Saturn in Virgo can represent a hard and enduring work ethic that puts a very practical and concrete demand on the fertile ideation of its potent eighth house.  In Leo navamsha, Saturn, then causes abuses through authoritarianism upon the Virgo working class.

Prosperity at times may be subject to withering highs and lows, exacting hard lessons on the national consciousness, creating possibly a cynical middle class.  Hard workers, but also very possibly long term economic servants to a cold and exacting ruling class symbolized by the tall buildings and austere facades of its financial centers in the big cities.

The Sun in Gemini, but Taurus navamsha denotes creativity, positivity, and an emphasis on wisdom and ideas, but also industriousness, perseverance and a certain affinity for wealth and the display of it. 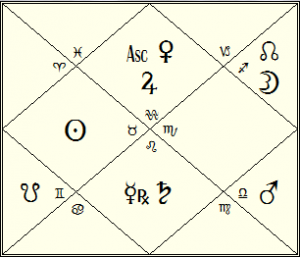 Scorpio rising for the national chart indicates a hearty drive for success, at great cost to life and limb, as told in the hard life of its pioneers, enduring great hardship amidst an arduous drive to conquer the land.  Ultimately triumphant, and forging a formidable national character with great resources to create great artifices of technology, but also terrifying machines of war and destruction that can either be deployed for great good or great destruction.  It is a fine balance requiring constant conscientious self-governance.

Mars in Gemini disposing the USA ascendant in the eighth house denotes a strong passion to project, extend and communicate ideas and connect parties and disparate individuals and groups with its philosophies.  Mars also in Libra navamsha, debilitated, pulls down the expression of Mars to brashness sometimes, overstepping its bounds and then waving its stick too much, almost in a challenging or threatening manner, and then projecting force in most fierce ways at times.

Uranus in opposition to the ascendant (or setting at the moment of the chart) denotes a great revolutionary spirit, bold and innately progressive in its approach, it is a status-quo challenger to smaller minded authoritarianism (non-monarchical) and instilling greater group or collective execution (democratic) of its goals; higher minded and non-provincial, more to the universal needs of mankind.

The Moon in Aquarius, of relatively strong radiance (reflected sunlight) denotes strong egalitarian themes and a greater love and passion for truth and justice, not just for the few but for all.

With the Moon ruling the ninth house of dharma in a cardinal house makes it raja yoga, full of great good fortune and potential in her people and vast land.  The ruler of the fourth house in the eleventh denotes great financial acumen for the people and the land abundant in resources.

A somewhat debilitated Saturn disposing the Moon may lend to some over-sentimentality, as well as inflexibility on the part of the people.

The Moon in the navamsha of Sagittarius also denotes an undercurrent of adventurousness to the people, but also a love of truth; that they cannot be held down.

As well as the strong good fortune of the conjunction of Venus and Jupiter in the eighth house trining the Moon in the fourth, and Jupiter making Vedic trine to the twelfth house making great expanses and vistas to let the spirit expand, refine and grow.

The Nodes in the Cancer/Capricorn axis in the third and ninth houses shows a great forwardness in extending love and hospitality to all with the subtle foundation of shrewd command and control of resources, time and energy and  a tendency towards ambitious goals.

Pluto down in the third house depicts possibly the pathology of opportunism and unrestrained aggressiveness destroying opportunities for a more refined self-expression of the nation and the people.  Hustle and bustle is not everything, chasing after everything makes you neglect the more valuable things right now within your reach.

Neptune in early Virgo in the eleventh in tight square to Mars in the eighth house, can show a dysfunctional attitude towards work, the honor of work, and therefore as a depletion of strength and health through dreamy neglect and escapist venues.  The sense of morals becomes highly deluded, but also painfully misdirected by a false or mistaken sense that glorifies strength, maybe visiting destruction and suffering upon others to compensate for a deep sense of internal powerlessness.

Predictions for the USA

As of 2016, so far an amazing year of American politics, there will be a set of very intense transits being brought to bear on this natal chart of the US.  The chart is posted below.

Transiting Pluto is in tight opposition to the US natal Sun and square to its natal Saturn.  Pluto is the planet of the abuse of power which many times ends in an irrevocable change in the life of an individual or nation, and one can expect a time of dust-settling after the final crescendo of Pluto’s not very subtle power.  It has been said that the Republican party is in a state of near collapse, no doubt accelerated by the candidacy of Donald Trump.  One might say that the campaign of Bernie Sanders is doing the same to the Democratic party.  This could be one for the history books. 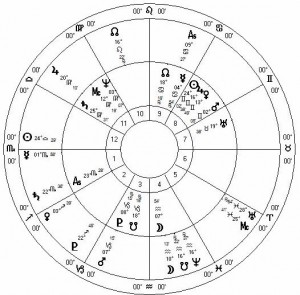 Corroborating the portenTs of Pluto above is the close conjunction of transiting Saturn to the US natal ascendant, the effects could be similar in scope to the previous mentioned Pluto transit.  Saturn may have the effect of accentuating some of the psychosis of the American consciousness to be followed by a purgation or harsh lesson learned in the process.  Saturn usually has the effect of increasing the difficulty of situations and aggravating the anxieties and frustrations of the people; it also has a separating or terminating quality to it (again similar to Pluto above.)

Transiting Uranus will be in opposition to the US natal Saturn at various times in 2016, again having the effect of shaking the foundations of the national sense of identity, which paves the way for new solutions to enter the collective mindset; and there could be a distinct clash between the old and obsolete paradigms with fresher, more progressive ones.

Transiting Neptune in trine to the US natal Venus and Jupiter could be said to engender a fragile, or not-quite-real sense of hope and possibilities; but could also help install new, more compassionate themes to the national dialogue.

Right before the elections on the first Tuesday in November 2016 transiting Jupiter will be in square to the US Gemini stellium: the sense of hype and hyper-sensationalism may be very high, offering many bold promises irregardless of their actual ability to be implemented.   There may be a lot of hoopla and fanfare, but when the party’s over (after the election) the same old situation may still be in place.

Very interestingly on the day of the election transiting Mars will be within one degree of the US natal Mars, energy outputs could go through the roof in a final effort to implement ambitious enterprises, like an election for US president.  Not exactly the safest of astrology.