Topping out an eventful month astrologically, the last set of configurations touch off on Wednesday, Thursday, and Saturday (May 27, 28 and 30) this week.  As I wrote about a couple weeks ago, I felt May could be one of the more pivotal months for some time to come.  Understand though that many events go on under the radar screen but their repercussions surface weeks or months later.  Sometimes events occur on a level other than what parades across the testimony of our eyes; there are collective subconscious events that are only hinted at in our conscious awareness.  Before anything can happen in the physical world, there has to be an a priori subconscious expectation of it.

Image below: Northern Hemisphere, about 3-4 am looking southeast, for Southern Hemisphere look East, constellations will be inverted.  Neptune is not visible in the night sky. 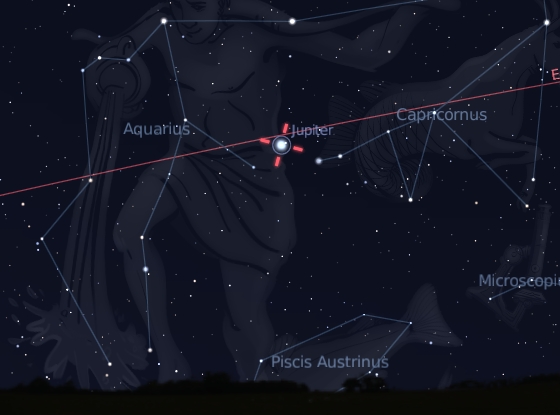 This week with the conjunction of Jupiter and Neptune, followed by Neptune turning retrograde one day later one could expect a powerful surge of the tendency of people to project their highest feelings of divinity onto any subject or situation, to feel rapturous ecstasy at the anticipated ceasing of all struggle, pain and suffering therefrom, and a deepening of compassionate regard for others.  The sense of bondaries and separation seems to dissolve.  These are two very “unrealistic” planets, they deal in the realm of possibilities, potentialities, and the future.

This is a once in a twelve year cycle, the last occurrence was in 1996-97.  You might recall the popular song “Kiss from a Rose” by Seal that seemed to be coming from everywhere at that time.  Clinton won a landslide over Dole, the US stock markets were at the very crest of a peak which they have never regained, I got married (not one of my best decisions), the Hale-Bopp comet showed promise but ultimately fizzled in the sky, the Heaven’s Gate religious group committed mass suicide, and Mother Theresa and Lady Diana died.

All of these events were a very Jupiterean-expansive, and Neptunian-sensitive nature with positive and negative overtones.  There were many more events in 1996-97 of course; and there were more planetary factors involved, but those above seem to indicate at least the effects of Jupiter and Neptune conjunct and we can use them to project onto the next 12 months or so.

Of course we now have the first year of the Obama administration, with all the promises and hopes of his campaign.  Sadly, behind the electoral hype Obama seems little more than big-moneyed knock-off from the Bush mold with the expansion into Afghanistan, continued involvement in Iraq, continued  US renditions and torture, increasing involvement in Eurasia, Pakistan, and of course the bailouts.  The list goes on ad nauseam; but already we can see the hype being presented in the media about the stock market coming back, the benefits of the stimulus packages creating opportunities, and that the administration is determined to “bring back prosperity”.  So everybody is high on renewed optimism, never mind the workforce reductions, plant closings, and exploding inflation.

I would be remiss to mention the Jupiter/Neptune connection to the spread of viruses, or at least the expansion of the illusion of viruses as a threat to our society.  Hyped, clandestinely synthesized, or actually real; the growth (Jupiter) of ill-health conditions (Neptune) is not out of the realm of possibility.  As the planets connect with others in the coming months, this issue of epidemics could have developments forthcoming.  This is one of the subjects for my special report to be published very soon.

If you look at the trends in Washington, DC you can see a literal media campaign going strong of Barak and Michelle Obama with pictures on coffee cups in gift shops, magazine interviews, photo ops, comic books, new pets at the White House, and political fashionista news.  Never mind the falling popularity rating of the President and his corporatist-fascist maneuvers, it’s the image, the good feelings, and vague generalizations of hope that are important.  Is it a coincidence that Jupiter and Neptune are conjunct in the sky?

To get a deeper insight at this you need to take a look at Jupiter and Neptune’s dispositor (Saturn, the planet ruling Aquarius where Jupiter and Neptune now are sidereally).  Saturn is in a state of debilitation in Leo, which has the effect of degrading the astrology of Jupiter and Neptune, bringing out the bad points instead of the good.  There are good things that can come out of this configuration (increased compassion, sensitivity, and spirituality), but the debilitation of Saturn can have the effect of delaying, obstructing, or misdirecting them to an extent.

You could also attribute a degrading influence upon this configuration by Jupiter also disposing malefic Pluto in sidereal Sagittarius.  if you don’t take dispositors and disposed planets into account in predictions, you are missing out on over half the info you need to be accurate.  That goes for natal chart interpretation as well.

Mercury turns direct again on Saturday, May 30; otherwise known as the traditional green light to start important initiatives.  I hardly sweat retrograde Mercury at all, I’m more concerned if Mercury is making an aspect to a malefic planet than if it’s moving backwards; the connection to a malefic planet is much more inductive to miscommunications or mental mix-ups.  A retrograde Mercury can be thought of as in a more subjective/reflective mode, taking a little longer to reach its conclusions.  One of the reasons that there is a Star World News is to alert the world at large when Mercury is making aspects to malefic planets and therefore mucking up the normal course of affairs.

I will never forget noting that a fatal train accident in Los Angeles resulting from an inattentive engineer pushing the wrong button occurred precisely on a day when Mercury was aspecting Neptune.

We are building up to a significant set of astrological configurations coming to exactness in late 2009 and 2010 that most likely will coincide with significant world developments which are possibly world changing; the astrology of May (as highlighted on this site over the last few weeks) may well have already incited developments which will have direct bearing on those times ahead of us.  This report hopefully will be ready in two weeks.

Sunday and Monday, May 24-25
No peaking influences

Tuesday, May 26
Urgency is added to an already excited state of expectation; be wary of motivations based on misguided thinking, subtle self-sabotage influences, or unrestrained arrogance.  (Mars sextile Jupiter and Neptune)

Wednesday and Thursday, May 27 & 28
While transcendent forces are at work, there could also be some deep blocks of stumbling in relationships to be worked out.  Physical vitality may be affected, and behaviors could be strange in some.  Be careful of addictions, sensitivities, and chronic conditions.  Significant events can occur which may have suspect or self-deceived intent behind them.  (Jupiter conjunct Neptune, Venus aspects Saturn and Pluto)

Friday, May 29
Restrictions  on self-expression may be felt more acutely, inciting some to make changes.  (Sun quintile Uranus)

Saturday, May 30
Mental work should get a good kick into action, this should be a positive day for verbal and intellectual work.  (Mercury stationary direct)

Sunday, May 31
Frustrations could be strong. Be careful of accidents and injuries; obstacles and difficulties do not yield simply through force.  (Mars sesquiquadrate Saturn)

Monday, June 1
Relationships may hit some rough roads, the feeling of love may seem a little dry.  In some cases love may be replaced by “hate”, which is always love’s lesser replacement.  (Venus parallel Saturn