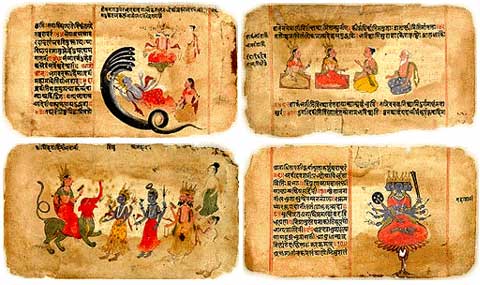 The Vedas (Sanskrit: véda, “knowledge”) are a large body of texts originating in ancient India. Composed in Vedic Sanskrit, the texts constitute the oldest layer of Sanskrit literature and the oldest scriptures of Hinduism.  There are four main Vedic texts: 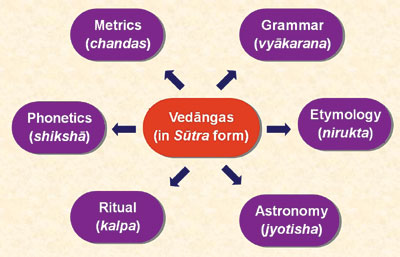 Another very important concept in understanding the origin of Vedic astrology is that of the Rishis. The Rishis were ancient Indian sages of advanced spirituality; i.e. a sort of divine race of men distinct from normal humans. The Rishis are regarded as the spiritual forefathers of humanity, as great guardians of wisdom, who existed in distant, prior epochs or yugas of history. 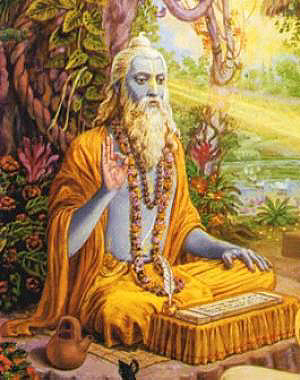 One of the most revered of the Rishis was Vyasa, or Vyasadeva, the writer of the Vedas as referenced above. There is a story in the Shrimad Bhagavatam as to how Vyasa came to write the Vedas:

“Once upon a time he (Vyasadeva), as the sun rose, took his morning ablution in the waters of the Sarasvati and sat alone to concentrate. The great sage saw anomalies in the duties of the millennium. This happens on the earth in different ages, due to the unseen forces in the course of time. The great sage, who was fully equipped with knowledge, could see, through his transcendental vision, the deterioration of everything material, due to the influence of the age [of Kali]. He could see also that the faithless people in general would be reduced in duration of life and would be impatient due to lack of goodness. Thus he contemplated for the welfare of men in all statuses of life.” (1.4.15-18)

“He (Vyasadeva) saw that the sacrifices mentioned in the Vedas were means by which people’s occupations could be purified. And to simplify the process he divided the one Veda into four, in order to expand them among men. The four divisions of the original sources of knowledge (the Vedas) were made separately. But the historical facts and authentic stories mentioned in the Puranas (Mahabharata) are called the fifth Veda.” (1.4.19-20)

In other words, Vyasadeva could see that humanity was at the cusp of a very dark spiritual period in the Kali Yuga, and they needed some form of guidebook to give them rituals to help them through these times. Vyasadeva became the author of the four Vedas. The Vedas became the forerunners of other subsequent Hindu texts:

According to the lore of Vedic astrology, the codification of Vedic astrology or Jyotish came about through another Rishi called Parashara with his magnum opus the Brihat Parashara Hora Shastra, which is regarded to this day as the chief handbook of Vedic astrology.  The Brihat is in the form of a dialogue between Parashara and his student Maitreya describing the  calculation and interpretation of horoscopes.

Parashara was the father of Rishi Vyasadeva referenced above, and according to the story he became Vyasa’s father one day when he was crossing a river in a boat and he was casually looking at his favorite stars in the heavens (with such great depth of astrological knowledge that he possessed) and suddenly realized that it was an exceptionally auspicious moment and if a child was conceived at that time, he would be a great expert in the shastras (scriptures.) Thereupon he requested of the lady rowing the boat that she marry him, and she agreed and soon after was born Vyasa.

Other authorities will state that the first systematization of Vedic astrology took place around 3,200 BC, just before the Mahabharata period, according to the Indian calculations.  More reliably the Brihat was first published in 850 AD.  The real authorship is unclear, as well as the actual date of publication with versions still being created in the 1800’s.

It is debatable whether astrology started in India or not. There is a very well documented evolution of horoscopic astrology (using a chart wheel to delineate the character and destiny of an individual) starting in ancient Babylonian times, extending through Greek history, into the Islamic world, Medieval times, the Renaissance and then coming to modern times.

So there is a very strong possibility of a cross-pollination of ideas between Mediterranean and Indian cultures, including astrology. India incorporated and then added to horoscopic astrology with their own philosophies and spiritual concepts.  The Greek scholar Pythagoras is said to have borrowed heavily from India in this theories about reincarnation.

In other articles I will be highlighting some of the differing views of actual Vedic history.  The information above could be regarded as largely myths and legends, but like all myths there is some foundation of actual history to them.  All in all, that’s a very interesting subject in itself.