Aspects of Mars and Saturn; Astrology for the Week of July 26, 2010

Mars can be like the irresistible force meeting the immovable object, which is Saturn.  SCREEECH!  BANG!  CRASH!  Mars represents energy in motion, but Saturn represents for us the unshakeable framework of cosmic law.  It’s pretty clear who will win this fight.

For us mortals though, blundering our way on Earth, these energies existing inside of us are in a state of semi-luminosity and subject to breakdown and collapse; and many times in our bodies muscles and tendons tear, and bones crack and break.  There is a literal connection to bones and and muscles with Mars and Saturn;  i.e. people suffer strains, sprains, and breaks during such transits, progressions, or dasas (all in extreme cases).

In a larger context desires, aspirations, and human endeavors suffer setback, delay, and collapse; on the social scale emotions hemorrhage and hope seemingly is destroyed.

I may get slightly carried away sometimes describing things here on SWN, but I take various configurations going on in the sky and make them into teaching moments.  Things probably will not go that bad by and large, but some people definitely will feel it on a very personal level as I have described.

The bigger picture is not all that good, but there is Jupiter in Pisces sidereally in its rulership in the equation helping us along, possibly redeeming us from a far worse outcome.  Powerful forces however are on the move seeking to radically change economies, alter national boundaries, and re-write the rules for human thinking.

I’ll just name a few: wars in Iraq, Afghanistan, Pakistan, and very possibly in Iran and North Korea; economic austerity measures put in place to pay off massive bank bailouts in Europe; the BP oil spill; the ability of the government to shut down the Internet being put into place; an invasion of US southern borders by drug mafias; and an increasingly fascistic federal police state.

Things are not as bad as I thought they could be at this time, but they are bad enough.  I won’t discount either a very powerful spiritual awakening in people around the world.  The seeds of our success and victory as a race are being fierily implanted in our worlds right now, and if we water and nurture them great things will come to pass in the coming decades.

A lot of surpassing miracles can be birthed out of a little pain and suffering.  If the power is cut off from our TVs, mp3 players, and computers; maybe we will start to reconnect in a uniquely personal way once again.  Our values might return to simpler, yet more real things.  It is then “the people” will be more powerful than ever; most especially so when the previous paradigms that ruled us: a weak Christianity; a medievalist Islam; a materialistic upward social mobility, and all previous measures of prestige and power will be seen to be brittle, empty, and delusory as they are.

All I can say right now is, keep your eyes open.  Take note of what is being taken away from you, and the opportunities now at hand which you may not have seen before because the cluttering other things.  The new paradigm is what is inside of you already, not what you have to acquire from without. 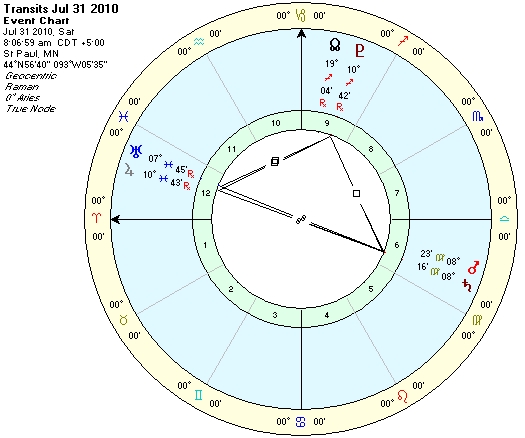 This week has a three day gap of no configurations becoming exact, so nothing to report there.  People will have their own personal cycles to deal with.  Then on Friday, July 30, Mars will oppose Uranus, and the following day it will conjunct Saturn (click on wheel at right).  Tension and frustration may be very high, don’t blame anybody, and remember that it is a particularly intense alignment of the stars above us at work.  Be careful; don’t let the worst parts of you lead you into situations that have a higher probability of going awry.  Injuries and accidents are at higher risk.  Patience may become very thin.

The fabulous astrology book, The Combination of Stellar Influences, which is one of my main resources for two decades (get it at right), speaks of the Mars/Saturn/Uranus configuration as:

“An act of violence, the occasionally wrong use of extraordinary energy, undergoing great effort and toil; a violent or forced release of tensions or strains; the stage of challenging others for a decisive contest or fight; injury, accident, deprivation of freedom:

The inclusion of Pluto into the configuration will keep things pretty intense.  As mentioned above, Jupiter will be a mitigating factor; but a word to the wise should be enough.  We have another week or two of intense stuff, and then things should calm down shortly thereafter.

Mon, July 26
The beginning of the week starts out equally as intensely as the preceding weekend.  Today it is important to keep the mind strongly attenuated to counteract influences that could cause neglectful, deceptive, and pathologically toxic behaviors.  Remember that things done seemingly innocently in one moment can have grave consequences down the road; be sure that your outlook is not overly rosy.  (Mercury opposite Neptune, Sun quincunx Pluto, Sun trine Jupiter, Mars quincunx Neptune, Saturn opposite Uranus)

Friday and Saturday, July 30 & 31
Excitement or hysteria could be very high, leading to some intense and volatile situations.  Try to take it easy, on others as well as yourself.  An intense feeling of alarm will quickly pass into something much more rationale, from there you can act.  (Mars opposite Uranus, conjunct Saturn)