Saturn Draws Out Your Pathologies

This week there are a number of astrological events to comment on, and significant of them is the opposition of the Sun and Saturn on Sunday, March 21, 2010.  What this means is that the Earth comes to it’s greatest midpoint between the Sun and Saturn; we’re “caught in the middle”, as it were.  Saturn should be highest in the sky around midnight, and at it’s brightest. 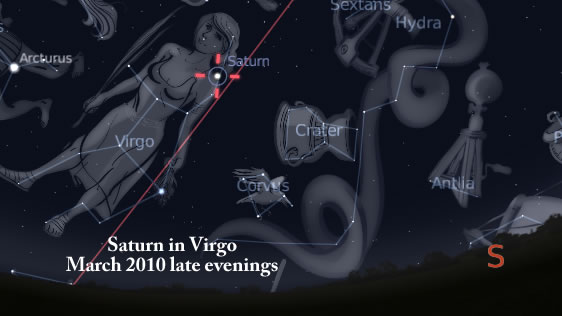 Saturn of course is never a bright star in the sky, it has a cold, dim tone to it.  It doesn’t seem to inspire enthusiasm in looking at it, but maybe sober realism.  As you can see in this image above I created in Stellarium, a free open source program, this is how Saturn will look at around midnight in the sky if you look to the southeast about one-third to one-half the way up (and of course, barring any clouds).

Virgo is the great feminine figure in the sky, connected of course to the word virgin, or Virgin Mary if you will.  I’ve commented in the past how a lot of Hollywood starlets have Virgo prominent in their charts (sidereally).

Therefore Sunday this week should be a high point for low points in consciousness potentially.  As I always say though, the problem is not in Saturn, it’s in us and Saturn merely draws it out for us to see and do something about it.  Saturn has that thankless task of mirroring our various pathologies; however in hindsight he always gets his due.

However this weekend will coincide also with the US House of Representatives vote on the health care reform bill, possibly invoking the “Slaughter Rule” (deem and pass) as an end-run around he Constitution.  So it is possible some out and out very bad things can happen under Saturn’s influence.  Saturn represents control, even by forcing things through a legislative body.  Interestingly Saturn is in Virgo, a very health-oriented sign.

This weekend also is the Vernal Equinox on Saturday, March 20, or the first day of spring in the Northern Hemisphere.  On this day, both the day and night are of equal length but the days are becoming longer and longer.  The days getting longer culminates on the Summer Solstice in June, when they start getting shorter again.

Day by Day with Results Added Through the Week:

Mon, March 15
Unusual relationship situations may be touched off, which may not last long but could also be conducive to a more non-possessive love.  (Mercury conjunct Uranus, semisquare Juno)

Tues, March 16
Unusual and/or short-lived relationship situations may occur; the key to their success is not wanting to control or direct the other person.  (Juno semisquare Uranus)

Wed, March 17
Intense and beguiling relationship situations may be pushing for your attention.  Like all energies and influences, you need to control them and not them you.  Harnessed, those forces can take you far.  Freedom, individuality, and following your own path may be issues accentuated.  Later on, a feeling of urgency and fast pace may be strongly prevalent, causing some to border on hysteria.  (Venus sesquiquadrate Neptune, tridecile Mars, Sun conjunct Uranus, Mercury trine Mars)

Thurs, March 18
A serious and/or pessimistic tone may influence affairs; there could be delays and obstacles to successful communications.  Some may become effectively paralyzed by worry, overconcern, of being afraid of saying or doing the “wrong” thing.  Important relationship developments may occur.  (Mercury opposite Saturn, Sun sesquiquadrate Juno)

Sat, March 20, Vernal Equinox
This is the first day of spring, when the days start to run longer than the nights, also called the Vernal Equinox.  The VE is not necessarily of significance to our daily lives, however there are other astrological elements to coment on: Obsessive or compulsive tendencies may be brought out: seeing the negative in things, not being able to get certain kinds of thoughts out of one’s head, and possibly paranoia brought about by faulty reasoning.  Significant relationship developments may occur.  (Mercury square Pluto, Sun quintile Node)

Sun, March 21
Anxieties and worries may acutely affect functioning, people may see (and act on) the negatives their semi-deranged minds are seeing (Saturn bringing out the semi-deranged parts of their minds).  Pathological or obsessive behaviors, self-destructive tendencies, and the more problematical patterns of action may be brought out.  Obstacle, delays, and other frustrating manifestations may try their hardest to bring you down and prevent you from making a personal victory; however you are your own worst enemy.  Overcome the tendencies Saturn brings out today, and you’ll be near unstoppable.  Significant relationship developments may occur.  The whole day however will have an undertone of “I can do it” though with the Sun trining Mars.  (Sun opposite Saturn, trine Mars; Venus square Nodes)

Mon, March 22
The feeling of “I can do it” will get stronger as you continue to apply yourself; after a little effort things may go smoothly.  Positive, uplifting relationship developments may occur.  (Mars sextile Saturn, Juno sextile Jupiter)