Putin and The Ukraine Wars: Timeline for His Crusade

Astrology of Putin and The Ukraine War 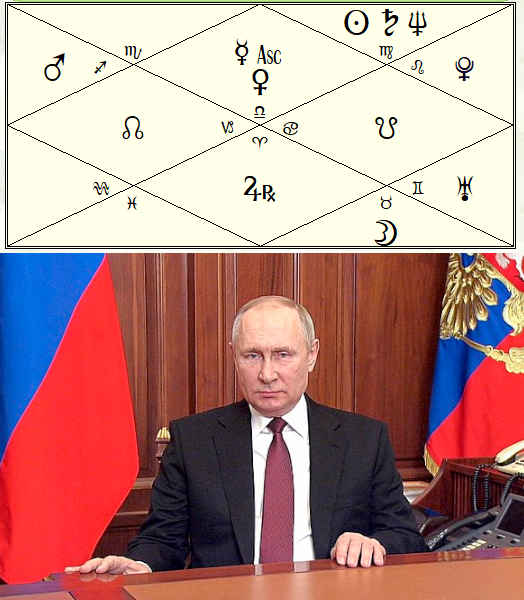 The situations that brought about this increasingly horrific Russia-Ukraine war are complex, as most wars are.  My goal here is to try to describe the picture in terms of the astrology of these times and the chart of Vladimir Putin.

From a thoughtful look at various news sources and the astrology I think that Putin took the initiative that he did because he thought himself to be a sort of redeemer of the lost glories of the former Soviet Union, which suffered plundering by oligarchs in the immediate aftermath of the breakup of the USSR in the 1990s.

If you look at the text of Putin’s speech at the onset of the invasion he goes into comprehensive detail about money and resources robbed from Russia as injustices that have not been righted yet, not to mention the long-term provocation, as he saw it, of the NATO nations.

I see new long-term and well as significant short-term trends in the astrology of Vladimir Putin, some of which will be playing out before our eyes in the next 45-60 days.

Let’s start with a recap of the natal chart of Putin (Oct. 7, 1952, 9:30 am BAT, St Petersburg, Russia) using the zodiac and interpretation techniques of Vedic Astrology. You can also read my indepth analysis of Putin’s chart back in 2014

He is a very powerful and charismatic individual with Venus, Mercury and Jupiter in prominent positions in this chart, the angular first and seventh houses.  Venus in Libra in the first house giving him raja yoga (great distinction and good fortune).  With Mercury in the first house as well, Putin leads by the power of his ideas as much as his will and forcefulness.

Jupiter in Aries in mutual reception with Mars in Sagittarius in the third house, gives him a crusader-like effect on others, and his ideals (whether accurate or not) give him great motivation and persuasive power.  The danger here, of course, is that he could be misguided, deluded, or otherwise biased, but still effective, nonetheless.

The Moon ruling the tenth house of power and authority in exaltation in the eighth house gives him great potential power to effect changes on a large scale and he can be quite intimidating in an understated way.

The Sun and Saturn together in Virgo in the twelfth house indicates this shrewd intelligence, but also employed in a very subtle and/or sneaky way, and that he could himself be the puppet of shadowy forces behind the scenes.  Most politicians I’ve observed to have twelfth house accentuations; i.e. they basically become cronies of various vested forces.  There is more to him than meets the eye.

Looking at his Vimshottari dasas (Vedic planetary periods) he very recently entered a new maha (great) dasa of Mercury, which indicates a much more ideals- and perceptions-based chapter of this life.  Mercury is quite strong in his chart, relatively unafflicted and enhanced by aspects from Venus and Jupiter.

It has been said that Putin waited a long time, letting the peoples of the Donbass region endure years of bombing by the Ukraine government forces, but perhaps he just had to wait until the right time for him to act with his newly-lit agenda.

Looking at his solar return chart (the birthday chart, also called varshaphala in Vedic astrology) there was a very tight conjunction of the Sun and Mars and a strong sixth house with Jupiter, Saturn and Pluto; it would be the chart of someone who is about to launch a new endeavor with definite obstacles to be overcome in the process. 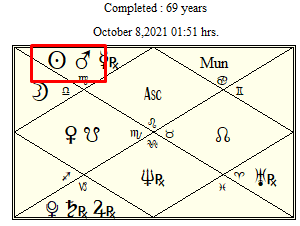 I have a timeline posted here, which look to me to be peaks in the current war activities in the Ukraine, but also other areas of import such as politics in different nations. I’ll try to give some brief explanations as to what they may indicate.

During this time, we may have a worsening of conditions, manifesting in jarring and discouraging ways, whether it be the responses to Russian aggression or in overall sentiments of any side (misguided war rhetoric, promises and pronouncements, regretful actions, etc.) and Putin himself may suffer some setbacks personally, getting him back to reality. (Mars semisquare transitng Neptune, Sun semisquare transiting Uranus, Saturn square Putin natal Jupiter)