Astrology for the Week of April 4-12, 2010: Pluto Stationary Retrograde

Pluto turns direct this week.  Pluto, or Hades as he was called in Greek myth  was the lord of the underworld.  Interestingly there have been a number of earthquakes recently (and tragically for some); the underworld has indeed been shifting for us. 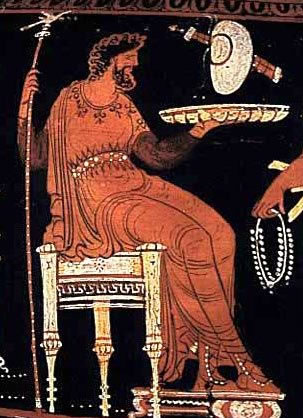 Pluto represents change.  Seemingly humanity’s preferred method of change is by crisis; that is, we wait and wait until the last possible moment, and then some more until we start instituting reforms in our life.  By then we are in rehab or fighting for our life in the ICU. It’s around that time  that we start saying to our self, “Hey, I think I need to straighten out my act!”

So earthquakes occur literally and then figuratively in our lives.  Sometimes we already have done a lot of the work and striven to live lives of virtue and honor; when Pluto comes around then he likes to amp up the energy anyway, exposing us to a lot of things that cause us to “speed up” our progress, or may very well likely send us down a painful detour.

You’ll notice also a lot of breakdown that accompanies Pluto’s touching our lives: mechanical, electronic, physical, and emotional.  When things break, they need to be replaced; and sometimes something breaking can be the best thing that ever happened to us.  Pluto can break us away permanently from structures or patterns that are obsolete for us but which we may hang on to anyway.

So don’t completely demonize the force that Pluto represents, all things die and decay; all things that is, that exist in the relativistic, temporal, erroneous, and illusory universe of the human (mortal) context.  Pluto represents the inevitable destruction of all un-Divine energy; ergo, if you seek to emulate the Divine, eventually you escape from the world of impermanence and death.

Hades, or Pluto as the Romans called him was a very powerful figure. The underworld contained all of the precious resources coveted by man, and that was Pluto’s realm.  So Pluto will represent the epitome of worldly living with all it’s sophistication, accentuation on materiality, and the struggle for supremacy of the ego over others.  So when Pluto comes around in your chart, or is touched off by another planet all sorts of temptations and quite compelling magnetisms seek to influence your behavior.  It feels really good, but in the end it only creates regret.

Highlights for the Week

So looking at the configurations this week I can see two significant peaks of astrological activity which may coincide with developmental peaks in our affairs.  Usually things happen or significant turns in life affairs take place when things are “hot”, and there are two significant hot zones this week: Tuesday, April 6 and Saturday, April 10, 2010.

As mentioned above Pluto turns retrograde on Tuesday, emotions usually run strong and deep during that time.  Many times they will coincide with events that reflect and at the same time incite levels of emotional intensity in our lives.  As you may know, emotions are always a very strong component of real change in any situation.  In the last few days we’ve had multiple instances of earthquakes, mining disasters, and military attacks resulting in many lives lost (Mexico, China, West Virginia, Iraq, and India).  On the other end of the spectrum we have Tiger Woods’ press conference that the sports world is all abuzz about.  There is also the shocking release of the video of US attacks on civilians in Iraq in 2007 by Wikileaks.

The Catholic Church continues to embroiled in ever more sexual abuse allegations with cover ups at the highest levels in the Vatican.  The Church seems to be acting less like Christ and more like Hades himself.

The other peak day this week will be on Saturday, April 10 with Mars making aspect to Pluto.  With Mars similar in ways to Pluto you can expect a stepping up of intimidation, inappropriateness of actions, and excessive over-zealousness inciting actions; it would be wise to avoid danger areas such as war zones.  Activity will be at a strong pace, so be careful about injuries from overwork or overstrain.  Relationships may take a beating to with one party possibly taking unfair advantage of the other.

Sun, April 4
Later in the day there could be moments of hysteria or alarm; perspectives of mind may be skewed by predispositions and various agendas, but efforts at persuasion may be hard to resist.  Feelings may be strong, relationship dynamics could be compelling.  (Venus trine Pluto, Mercury hard aspect to Mars and Jupiter)

Mon, April 5
Feelings and relationship situations may hit rough patches, just like road construction though you just have to slow down a little and be careful; eventually a smooth new avenue is built.  The desire to push on through obstacles may not allow patience much sway.  Momentum however may be our ally today, carrying us past areas that may have stopped us up in the past.  Be careful of sharp metal objects, cuts, burns, injuries and conflicts in general. Pluto turns retrograde tomorrow; its magnetism may be powerfully affecting everything already.  (Venus biquintile Saturn, Sun tridecile Mars)

Tues, April 6
Could be a pivotal day on all levels, hopefully for the better.  Energies and individuals may come to cross purposes and need to resolve their differences, the tone of conversation may be rather dark and intimidating.  A spirit of pessimism, depression or over-analytical zealousness may need to be dealt with; some people may feel inhibited or coerced.  (Pluto stationary retrograde, Mercury trine Pluto, biquintile Saturn, Sun square Nodes)

Thurs, April 8
The feeling of love may be very captivating today, even if it’s based on self-lies, self-innuendos, and other compromises of the true spirit of love.  However creativity and spirituality will be very strong, and the ability to touch the higher sensibilities of people will be attenuated.  (Venus quintile Neptune)

Sat, April 10
People may push the envelope in a variety of ways, possibly damaging their bodies, relationships, finances, or reputation if they are not conscientiouis.  Ideas, conversations, and situations may seem luminous and inspiring; but it could just as well be a case of projecting our hopes and dreams onto situations or people that are not really that virtuous.  Perceptions and thought processes may be overly colored by biases, predispositions, or even toxic physical conditions.  (Mars quincunx Pluto, Mercury quintile Neptune)

Sun, April 11
Early on, more so in European time zones; exciting, but fleeting relationship developments may occur.  The key is not to try to hold onto and try to control the other person or the captivating energy of the moment, but let it live through you and move on as it will.  (Venus semisquare Uranus)

Mon, April 12
Relationships may hit rough patches, calling into question the level of commitment of each party.  Remember that demonizing, or shaming or blaming the other person is the easy way out of things; revealing more of the accuser’s condition than anything else.  Rough patches successfully navigated here may lead the two of you to greener pastures very soon.  (Venus sesquiquadrate Saturn)