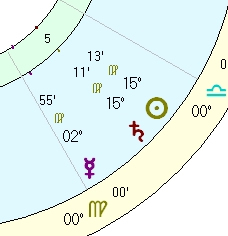 The configuration of note this week will be the conjunction of the Sun and Saturn on Thursday and Friday this week, which you can see graphically in images on this page.  The conjunction will occur in the preeminently feminine sign of Virgo (sidereal zodiac), which I find to be prominent in the charts of notable feminine figures in the world.

You can expect a distinctly muted tone to the day (Sept 30-Oct 1) and the temptation to give up, stop striving against seemingly insurmountable circumstances, or to just sort of “go crazy” for a bit.  “Going crazy” might be looked at as a somewhat ineffective response to a feeling of powerlessness that intimidating circumstances can create in us.

However the correct response to seemingly intimidating circumstances is to a. stay calm, b. not give up, and c. implement a carefully considered plan to resolve the situation.  Saturn’s victory is not the decisive coup de grace such as with Mars, rather Saturn’s mode is to persevere to the end and remained focused on its goals which will then manifest over a period of time.  Therefore the theme of Thursday and Friday this week, may be more sedate and resigned to the long haul.

The following day, Saturday, October 2nd, looks much different as there are multiple contacts between more dramatically outgoing planets.  So there could be a somewhat dark opening to the weekend, but midway through the excitement may mount causing all of the murkiness previously to be quickly forgotten.

There is an interesting situation developing with Mars and Venus this week and next.  This Sunday Venus and Mars will conjunct, but Venus right now is moving very slowly as it prepares to go retrograde on Wednesday, October 8.  Significant relationship developments could manifest and hopefully some very nice things for many people. 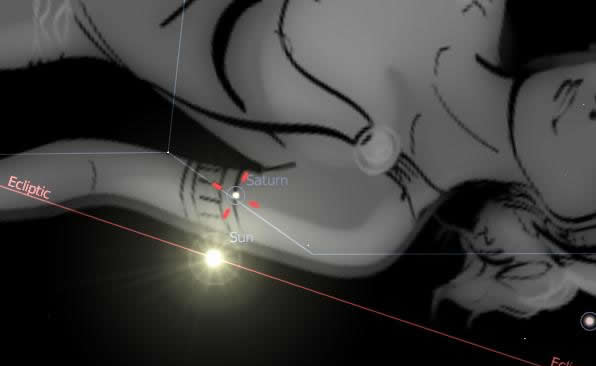 Monday, Sept 27
People may be acting under deluded or erroneous ideas; the tendency to act dishonestly, aggressively, or maliciously are enhanced; and problems from drugs or toxins may affect physical ability.  Some may be highly inspired from a truly spiritual place, but certainly some powerful psychic or metaphysical manifestations are possible.  (Mars tridecile Neptune)

Wednesday, Sept 29
There should be some upbeat moments.  It would be good to make room for possible inspirations and spiritual breakthroughs.  Discussions and learning situations should be advantageous.  (Sun parallel Jupiter)

Thurs and Friday, Sept 30-Oct 1
The Sun makes conjunction with Saturn right now, peaking on Friday.  Anxieties and mental agitations have a high probability of being aggravated, coinciding usually some with delaying, obstructing or problematical events that seem to draw up our worst reactions.  There will also be afflictions of Mercury to Mars and Neptune inciting further alarm and confusion over this time period.  Positively some people will be able to find renewed determination to overcome previous limitations, and will find new personal assertiveness.  (Sun conjunct Saturn, Mercury semisquare Mars, quincunx Neptune) 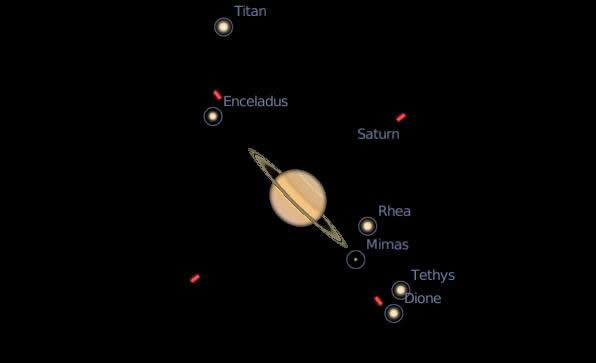 Saturday, Oct 2
Coming off a possibly rough Thursday and Friday, today could be distinctly happy and full of enthusiasm.  Many things may start out stingingly, but just as easily prematurely. Be careful of an uncontrolled mouth that causes you to blurt out things you later regret.  Powerful relationship dynamics are building, which will be peaking tomorrow. (Mercury opposite Jupiter, semisquare Venus, Mars sesquiquadrate Jupiter, Mercury opposite Uranus)

Sunday, Oct 3
Love and passion will be strong, eclipsing reason or realism.  Venus is moving very slowly now, getting ready to turn retrograde next week on Wed, Oct 8, and some very deep feelings may be coming out.  (Venus conjunct Mars)

Monday, Oct 4
Interesting day as heated excitement may prematurely co-opt events; but also strange motivations and manifestations may be brought out.  The tendency to act deceitfully, dishonestly, or co-dependently will be brought out as well.  Physical vitality may be vulnerable.  (Mars sesquiquadrate Uranus, Sun sesquiquadrate Neptune, Mercury biquintile Neptune)