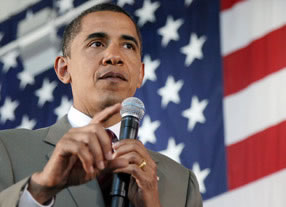 Obama’s cycles running up to and just beyond the election going into a potential inauguration on January 20, 2009 are pretty good.  Obama is actually riding quite high on the waves of his astrology, just like John McCain.  If his birth data is accurate, and I am reasonably certain that it is; there appears though to be a shift that will occur about one month before the election; as to whether that shift will be good or bad, I’ll get to that shortly.

So from 1997 until 2013 Obama could have a soaring political career (and indeed he has), but it could be quite lacking in substance.  When the Saturn maha dasa turns on for 19 years, he might be facing an uphill challenge and things might not be so “blessed” for him. In December 2007 Obama entered a sub-cycle that will last until October 4, 2008, characterized by success, an aura of authority, and kind of a driving need to be on top.  Indeed it was during this time that he rose to the top over all the other Democrat candidates.  In October he then enters a sub-cycle that….

Obama and his campaign are moving along fairly well.  He seems to have almost earned the coronation of the media, yet Hilary Clinton is tenaciously holding onto her chances.  I must say though that Obama is starting to take on an “internationalist leader” posture, and he’s almost got the delegate situation locked up to get the nomination at the Democratic Convention.

A lot of commentators say that he is in great danger of assassination, and this could set off a firestorm of ravaging race riots that could rival cost of the recent cyclones and earthquakes themselves.  Some people say that Obama and his Carter-era advisors have the potential to re-ignite a 21st century version of the US-USSR Cold War.

Inasmuch as McCain, Obama, and Clinton are just variations on the globalist theme, with all their backing of the US/British banking houses; Obama would clearly be a departure from John McCain who comes pretty much out of the George W. Bush mold.  Hilary has connections to the Bush family from way back in Arkansas and the secret Mena drug air landing zones, so she might be quite Bush-like herself.

Obama’s cycles running up to and just beyond the election going into a potential inauguration on January 20, 2009 are pretty good.  Obama is actually riding quite high on the waves of his astrology, just like John McCain.  If his birth data is accurate, and I am reasonably certain that it is; there appears though to be a shift that will occur about one month before the election; as to whether that shift will be good or bad, I’ll get to that shortly.

For this article I’ll be using the sidereal zodiac of Vedic astrology and some western style wheels, signs will be different from articles written from a western astrology perspective.

Transiting Pluto is moving into opposition to Obama’s natal Venus in the ninth house; this is

veritably a good thing for Obama because it lights up the most good-fortune-delivering house of this chart (the ninth).  And, since Venus is the ruler of his eighth house, which is by nature of a mysterious, but powerful force in life; I am saying that the action of a very powerful agent upon a very powerful planet in his chart could be enough to create some tremendous success in his life during the next few years.

Pluto will not actually be precise opposition to his Venus until the early part of 2009, but it is quite close enough for our purposes here.  In fact if Obama were to be inaugurated in January, the exactness of it would coincide with his coming into power.  Pluto upon his Venus will also have the effect of greatly intensifying his charisma, appeal, and charm; it could be quite a first couple of years of a potential Obama administration.

Pluto of course, takes no prisoners in its methods, and can leave quite a trail of bodies in its wake; a lot of abuses of power could take place in and surround the world of Obama.

Neptune is now in opposition to his natal midheaven; this would have the effect of creating false perceptions about him (deliberately fabricated or otherwise) or he could have some sort of personal crisis of confidence, and there could be some dissolving influence over his name, influence, and reputation; possibly scandals, but those happen all the time in Washington.  The midheaven I don’t find as a very powerful point in people’s chart; and it is extremely time-sensitive, so if this chart has an incorrect birthtime, this Neptune transit could be completely invalidated.

In January, conceivably when he would be inaugurated, Obama also will have a Jupiter return.  There will be a tremendous sense of uplift, confidence, and optimistic hope surging in his psyche; which is natural to assume if one was to find himself suddenly behind the desk in the Oval Office.  It would signify a great “good-luck stroke” in his life.

(I have posted the whole chart of Election Day 2008 and Obama’s chart at the end of this article.)

Some Challenges, But Powerful Opportunities

There are two potential western style factors coming into play that could throw monkey wrenches into the system: first in July (7-30-2008) transiting Saturn will conjunct his natal Pluto.  Typically this manifests in a person’s life as a time of hardship, intense need for focus and determination, and deprivation.  There could be some crisis in his power-base that necessitates a major retrenchment or re-working of the fundamentals of the operative principles in his life.

Secondly, in November 2008, the actual month of the election, the transiting South Node of the Moon (called Ketu) will be right over his natal Sun.  Obama’s Sun is very strong in his chart and is one of the main reasons for his overall success in life.  Ketu has malefic (evil) effect on whatever planet it is transiting over; this means his central focus of power and authority in life (the Sun) will be having some mysterious and ego-destructive effects on his life.

Ketu represents some of the more subtle forces of the universe, the job of which is to tear us away from attachment to egoic or worldly aspirations, mainly because it mucks things up so much.  On the other hand, there could be some potentially powerful and severe things going on in his life right during the election, and it could have the effect of making Obama extremely wily and subtle in the way his asserts himself.  Also, this could manifest as unseen, mysterious agencies coming to his assistance right during the election.

I guess it always pays to have friends who build and maintain the voting machines.  This is a weird one and it not very easy to predict as to how it will go.  Incorporating some of the Vedic predictive techniques may help to make things clear though nevertheless.

Obama in June 1997 entered a 16 year Jupiter dasa, and Jupiter dasas generally go pretty well for individuals.  Obama’s Jupiter is relatively well-dignified in his chart, but not greatly so.  Maybe he has had good fortune in life, but it is of the worst kind undeserved good luck, which can cause people to become arrogant, insensitive, and big roaring world-promises (saying flowery words that make people feel good, but very short on the actions to follow them up).

So from 1997 until 2013 Obama could have a soaring political career (and indeed he has), but it could be quite lacking in substance.  When the Saturn maha dasa turns on for 19 years, he might be facing an uphill challenge and things might not be so “blessed” for him.

In December 2007 Obama entered a Sun sub-dasa (Antara Dasa) that will last until October 4, 2008.  A sun dasa it characterized by success, an aura of authority, and kind of a driving need to be on top.  Indeed it was during this time that he rose to the top over all the other Democrat candidates (with the exception of Hilary Clinton).  He is riding high and in a position of strength.  If Hilary concedes he is expected to easily take the Democratic nomination and run against McCain in November.

However, the shift I mentioned in the beginning of this article happens as he moves into a Moon antara dasa on October 4, 2008; and this could actually put him over the top, even the already-strong-astrologically McCain.  Obama’s Moon is particularly strong, with its exalted placement in Taurus and its dispositor Venus very well placed itself in the ninth house.  The eighth house however is kind of destructive in its effects as well, like dynamite, terrible if it is misused, but wonderful if it is used well.

Potentially this could backfire for Obama, but at the same time it could put him far in the lead and give him the prize.

If I look at his Vedic solar return (called varshaphal) for 2008, it looks pretty fortunate and strong: there are three planets in the tenth house of success that are disposed by the Sun in the ninth house (a very good placement indeed).  The tenth house planets are also trined by Jupiter from the second house, giving great support and financial backing.

As far as if Obama will trump McCain’s astrology for the election, I reserve that for the next article in this series.  I also need to consider Hilary Clinton, whose birthtime has suddenly become uncertain; other birthtimes have come up, including some people saying her birthday may be completely different from what we understand it to be.  I will try to sort out the Hillary chart mess as well.

Come back soon, I’m about to make my “prediction”.