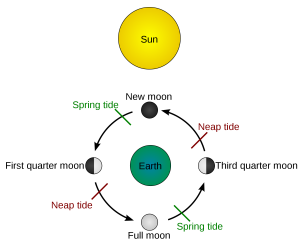 All dates and times are in Greenwich Mean Time (GMT, also called UTC for Coordinated Universal Time) so add or subtract hours indicated for your time zone for correct times for your location.  Time zone info at bottom of the page.

There are two ways to measure the orbit of the Moon, the sidereal lunar month, where the cycle is reckoned from the stars in the sky.  Then there is the synodic lunar month, or lunation, which is measured from phase to phase, i.e. new moon to new moon.

The synodic period is 29.5305882 days, while the sidereal lunar month is 27.3217 days.  The synodic orbit of the Moon is longer because the Earth itself moves in respect to the Moon, which means the Moon needs more time to “catch up” to the Earth.