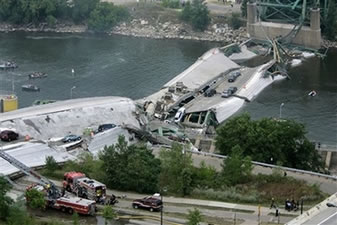 I have actually driven over the now collapsed 35W bridge in the Twin Cities countless times.  I was never a part of my normal routes, but like many people around here I felt just a twinge of my mortality.  Basically the equivalent of a bomb has been dropped right in downtown Minneapolis, a major traffic artery to the main district has been completely destroyed….

I have actually driven over the now collapsed 35W bridge in the Twin Cities countless times.  I was never a part of my normal routes, but like many people around here I felt just a twinge of my mortality.  Since about 6.30 pm Wednesday I’ve been pretty much glued to my television.

Basically the equivalent of a bomb has been dropped right in downtown Minneapolis, a major traffic artery to the main district has been completely destroyed.  From all accounts the bridge just chose to collapse at that time, it was 40 years old, considered middle aged for a freeway bridge and was found to be “structurally deficient” (along with 70,000 other US bridges) in 2006 by the US Department of Transportation.

If I take a look at the chart of the exact minute of the event, 6:05 pm in Minneapolis, a startling feature emerges.  Pluto, the planet symbolizing decay, destruction, and the abuse of power was just one degree from the ascendant.  In exact quincunx (150 degrees) was Mars in the sixth house.  Mars had also just completed a very powerful square to Saturn the day before.

In effect, three potent malefic planets where in aspect to each other setting up a potential situation where tremendous change (Pluto) could be wrought (Mars and Saturn) through trying and difficult situations.  The whole world’s eyes are in fact riveted on the stunning pictures of cars tossed about like toys against a backdrop of twisted steel and concrete; wondering how the people fared at the moment it happened.

In the Astro Success of the previous day I spoke of “two hard surfaces occupying the same position but going in different directions”, which could sound very much like a concrete highway bridge giving way.

Events are like signals to the consciousness, big bold allegories to wake up the consciousness of those who are so dense otherwise that nothing else wakes them from their slumbers.  The pride of complacency makes people not question the foundations of their present existence; the universe will not allow that to perpetuate.  Things go boom with a loud noise.

Back in the days of the Romans, as they spread their influence over much of Europe, they build roads and bridges that are in use today.  https://www.exn.ca/rome/roads.htm  It is not the way of things now to build things to last for thousands of years.  We build things that are meant to wear down in a certain number of years, because it is very profitable to build them again.

For the Romans it was important to build roads to extend their vast empire.  It seems for us, we build roads to make a lot of money.  I am not an engineer, but if you can build a superhighway system you can also build a society that requires that millions and millions of people commute daily over roads that every couple of decades require rebuilding.  So people can pay for more roads so they can get to work to pay more taxes to build more roads because everyone is driving to work to pay their taxes, and so on.