Mars gets people moving, it sets off their anxieties of powerlessness and their hysterics at supposed injustices they perceive.  People then react to these situations, self-imagined or otherwise, and panics and other calamitous developments may ensue.  This is especially so when Mars comes into detrimental aspect to other malefic planets astrologically, as it is doing this very week.

So, corresponding to the crashing stock markets worldwide and riots in England (plus a whole lot more global events) is the moving of Mars into aspect to Uranus and Pluto.  This is a heady mix of powerful energies that hopefully stirs things up for change, but it can also be a situation that simply escalates anxieties and then developments based on them.

The peaks of this current configuration are Aug 9, 11, and 13, with the 11th appearing the most intense.  I have been very busy and involved with some important personal and business projects, and I haven’t been able to comment much or do much work with astrology lately.  However we certainly are having a definite “spike” in astrology with Mars this week, reactivating things already set in motion during the astrology of 2008 through early 2011 (which I wrote extensively in Mounting Challenges).

But you don’t need astrology to predict serious things happening right now with the deliberate crashing, looting, and evisceration of the western economy.  Mars makes people mad, a situation that can unfold naturally, or be exploited artificially. 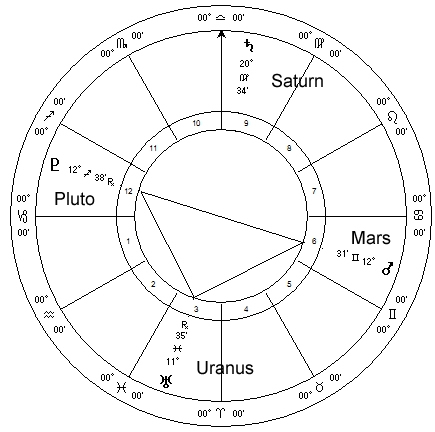 Mars is in square to Uranus, Tuesday, August 9, and then will be exactly opposite Pluto on Thursday, August 11th along with a few more negative configurations that day.  Mars aspecting Uranus will cause more extreme reactions of dissatisfaction and inclination to violence; and then Mars to Pluto will cause extremes in actions taken in depth, intent, and outcome.   Mars/Pluto aspects tend to push things past their normal limits.

Remember that the chart to the left uses the sidereal zodiac.

Stock markets react emotionally, but they are also manipulated by financial houses like Goldman Sachs that control vast sums of capital and resources, and who literally regulate their operation.  It is certainly interesting how the markets plummeted on Monday, and then on Tuesday they “miraculously” buoyed up again.  The Fed promising to open the floodgates of easy credit yet again also seemed to perk up trading.

A natural wave of fear must have spread through the global markets early on, but then the manipulations kicked in on Tuesday.  With high inflation, deficit spending, and strong imbalance of trade it is easy to get concerned about the US economy.  If the appearance of relative recovery is seen by the people, then they will continue to invest in the stock markets and keep the confidence game going.   So up goes the Dow again, and more and more middle class investors are set up to lose everything down the road.

The riots occurred at the same time as the unfolding of the US financial situation.  Remember that it is a known fact that most riots do not just occur spontaneously, there are usually provocateurs involved who may be connected to parties that have a vested interest in the outcome the riots.  I supposed that this sounds rather conspiratorial to some readers, however, this has been the pattern to most pivotal events in human history.  But certainly it is a combination of naturally-spontaneous and synthetically-incited forces.

Then on Wed-Thurs, August 24-25, 2011, Mars will move into exact square to Saturn, while at the same time they will both make minor hard aspects to Neptune (135 degrees, sesquiquadrate).  That will certainly be a difficult day; and it might be looked at as the last leg of this particular “Mars run” in August 2011.  Reinhold Ebertin describes Mars/Saturn/Neptune aspects as “weak vitality, an insufficient power to tackle resistance or any obstacles in one’s life, self-torment, loss of vitality thru poison, gas, or epidemic, mysterious loss, grave loss.”

Maybe think of it this way: all the anger (Mars) connected to anxieties (Saturn) and confused or murky issues (Neptune.)  It is a good bet that all issues, from the inner-personal to the societal-macrocosmic will be affected by those astrological influences.  Things during that time may seem quite a bit to be very bad, but it looks like it will be important at the same time to not give up and do the best with what you have.

Not long after that (August 29, 2011) things may suddenly seem much better as Jupiter makes a station, but the last week of August looks to be pretty active.

Wednesday, Aug 10
Unusual and/or suddenly appearing relationship situations may occur, which may be easily dissipated by any attempts to control or possess them.  Later on, tendencies to behave obsessively, compulsively, or pathologically will be activated.  Be careful of overextending yourself.  (Juno opposite Uranus)

Thursday, Aug 11
This day may feel quite intense, emotionally as well as physically.  Events may seem to be pushing you beyond your comfortability, and being nice may be the last thing on people’s minds.  There can be a tendency to pessimistic outlooks today, which can influence the outcome of events.   Unexpected and/or unusual outcomes are possible, but the feeling of calm satisfaction may be definitely lacking.  Being in any kind of danger zone today will be at higher risk of misfortune.  There could be good fortune through discussions, study, and creativity.  Be careful of over-excited hyperbole, or promises easily made.  (Mars opposite Pluto, Mercury semisquare Saturn, Mercury tridecile Jupiter, Sun sesquiquadrate Uranus)

Saturday, Aug 13
Early on obsessive or compulsive behaviors may be brought out; breakthroughs are as possible as breakdowns.  Relationships will be highlighted today with great richness of emotion.  (Sun sesquiquadrate Pluto, Juno square Pluto, Venus sesquiquadrate Pluto)

Monday, Aug 15
Relationship highlighted, be sure that what you see in the relationship is not really some form of escapism, or letting yourself be set up for disappointment later on.  Connections certainly will have that luminous quality however.  The Sun and Venus today enter sidereal Leo, creating a shift for everyone, moving into a new house with self and relationship themes.  (Juno biquintile Neptune)