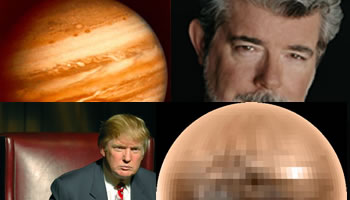 This week certainly produces an interesting situation as Jupiter will be aspecting Pluto, think of it as Zeus calls up Hades (the orginal Greek name for the Roman Pluto) and they set a date to discuss a potential business partnership.  Zeus wants loud music, bright lights and a lot of thunder and lightning; but Hades is more interested cornering the market and crushing the competition.  Sort of like Donald Trump meets George Lucas, a lot of stuff could come out and it may not last long, but it should make lots of dough.

Plus, this week’s transit Fortune vs. Challenge graph is posted.  Discover the quantitative values for benefic and malefic configurations to better help you manage this week.

This week there is a special aspect forming between two planets, Jupiter and Pluto.  There is a lot to say about this upcoming astrological configuration.  But before I get to that let me cover some important ground with the graphs I’ve been using lately.

More Info on the Graphs

I’ve already had a couple people comments on the graphs I’ve recently been incorporating into my weekly astrology articles.  They hope that those red lines won’t be so predominant this week or that.  So I need to respond and clarify what the graphs represent and mean to us.

This week’s graph is posted at bottom of this page.

First, the graphs are still a work in progress, barely two months old in development.  I am working out the bugs in the system.  Already I have lowered the value of the various afflictions to a planet and their dispositors.  It is a product of my mind and very much reflects how the planetary energies are interpreted by me.

Second, since I am incorporating the outer planets, there is probably going to a predominance of the "red lines" (malefic) to any given week.  The traditional benefic planets are Mercury, Venus, and Jupiter (plus the Moon); and they were counterbalanced more or less by the traditional malefics: the Sun, Mars, Saturn, and the Nodes.

Using Uranus, Neptune and Pluto (and I should because they are very significant astrological influences) demands that I put more "malefic" weight to the system; they have much longer orbits, and their nature is such that they act very deeply on the human psyche and they dredge up a whole lot of unresolved psychic "muck" from our worlds, and therefore they are "malefic".

The regular user of the SWN graphs needs to understand that the so-called malefic line actually represents something that is much more beyond what the human mind can readily interpret as simply "good or bad", perhaps "spiritually initiating" would be better.  The running editorial line on at SWN anyway is that everything that happens to us moves us to a higher place anyway.  That certainly would reveal the so-called malefic energies to be really beneficial, if you will.

Jupiter and Pluto Aspecting Each Other

This week certainly produces an interesting situation as Jupiter will be aspecting Pluto, think of it as Zeus calls up Hades (the orginal Greek name for the Roman Pluto) and they set a date to discuss a potential business partnership.  Zeus wants loud music, bright lights and a lot of thunder and lightning; but Hades is more interested cornering the market and crushing the competition.  Sort of like Donald Trump meets George Lucas, a lot of stuff could come out and it may not last long, but it should make lots of dough.

For the higher minded of us, the Jupiter/Pluto configuration may equate to an expansion of ambition, audacity, and the ability to believe that we can make magic.  What we believe we can achieve, to paraphrase Napoleon Hill; and certainly the key to success with higher spiritual work is faith, a vivid imagination, and a good well of spiritual good karma to access.  Wanting the show and the glory however is the ego’s goal: getting notoriety and recognition, but ultimately it proves to be small-minded and petty.  So the ego and its grasping nature (founded upon an innate bankruptcy of spirit and represented by Pluto) may try to appropriate divine lightning for personal gain; but that spiritual fire captured in the end might burn those who try.

The peaking of the dates of this Jupiter/Pluto energy will be on Monday, the 22nd of March, as the Sun squares Pluto; and Friday, the 27th as Jupiter makes a semisquare to Pluto.  It not be a stretch to predict that the banker-puppets, err politicians in Washington, will be asking for even more phenomenal amounts of money for the taxpayers can pay interest on forever to bailout the very people who enabled the crisis to begin with.  Hmmm, sounds like a good scam game to play; I guess it works, especially when you pretty much own and control everything anyway.

The banker-puppet, that is, standing US President, no doubt will be turning on the charm for our TV screens at this time, as will all those talking heads who occupy our media boxes. Too bad we don’t have a TV screen revealing what the puppet masters are doing, that could be a show this week to.  You and I though we can write our own script this week, wielding the lightning of heaven into the depth of Hades.

On Tuesday this week, the 24th, early on Juno the asteroid connected to relationship issues will be conjunct Neptune; which could certainly light up some beautiful possibilities in love.  Romance is one thing, relationships another; for this configuration there possibility of relationships forming that have an extra-spiritual or otherworldly quality to them.  There may not be practical elements to such relationships, but in their own timeless sphere they work.

Sun, March 22
While there may be an excess of enthusiasm to get things going, there may be still a lot to contend with that needs to be overcome.  Spiritual and cultural themes may be strong, and the power of love may seem especially transcendent.  People may seem to promise a lot, but may fall short in the long run.  (Jupiter in Capricorn quincunx Saturn in Leo, Sun in Pisces semisquare Jupiter, Venus in Pisces retrograde semisquare Neptune in Aquarius)

Mon, March 23
Early on relationships may come to new developments.  Connections and associations of a more competitive/constructive nature may come about, and drives of a debased nature may eclipse affairs of today.  Beware of breakdowns, but be open to breakthroughs.  (Sun in Pisces square Pluto in Sagittarius, Venus in Pisces retrograde semisquare Juno in Aquarius)

Tue, March 24
Relationships may present transcendent possibilities, however let your discernment as to what is transcendent and what is delusionally guide you and your associations.   (Neptune in Aquarius conjunct Juno)

Fri, March 27
A very powerful day: opportunities and temptations may come, the mind and ability to persuade may reach amazing power. Nothing may seem impossible; which, of course, can only add to the ego’s audacity.  Getting to heaven is not done with audacity, but with casting off the shackles of mortality and mortal thinking. Being godlike is doing godlike, not in the affectation thereof.  The power of love will be accentuated.  (Mercury in Pisces square Pluto in Sagittarius semisquare Jupiter in Capricorn, Sun in Pisces conjunct Venus retrograde in Pisces)

Sat, March 28
Cordiality in communications and creativity will be enhanced.  Superficiality or delusion may be an issue, but the potential to reach sublime levels of thought and rapport will be great.  (Mercury in Pisces conjunct Venus retrograde in Pisces)

Mon, March 30
Who and what you are may suffer some confusion and disclarity, which may have a detrimental effect on health levels.  Details may get distorted and cause problems.  Errors or deceptions may arise in general.  Beware of chemicals, toxins and sensitivities thereof.  (Sun in Pisces conjunct Mercury, semisquare Neptune in Aquarius)