The summer of Mars continues with July’s astrology.  The Universe gives to YOU the opportunity to get to know the war-god a much better.  Be PRO-active, not RE-active.  Like the chick struggling to peck it’s way out of the egg, or the butterfly out of its chrysalis, it’s do or die.

Life is a struggle?  Maybe that is how it must be at times.  Life emerges as a surge, a blossoming explosion of passion, desperation, and ultimate will.

Maybe you think life is like repose in a garden, a never-ending flow of happiness, beauty and good fortune.  I daresay maybe that life is a lie, a self-contained bubble of ego-flattering delight, shrinking smaller and smaller to oblivion.

Enter Mars.  He takes you to the edge….and pushes you over.

The chick in the egg cannot be assisted in it’s cracking out of it’s shell, nor can the emergent butterfly from its chrysalis.  It is the very struggle causes the final development of the body, and hence its ability to survive in the world, outside of that shell.  The fight is foundationally important.

The mother robin knows it, kicking her babies out of the nest.  The mother human knows it, laboring to give birth, and the baby has to struggle also.

And it would seem that we are all about to boil over, we won’t take it anymore, and the time for subtlety is far, far gone.  Chaos seems to precede change.

The peak astrology dates are listed below:

On July 6, the Earth forms perihelion, which means it is closest to the Sun in its elliptical orbital path, AND the Sun conjuncts the degree of Sirius, the brightest star in the sky in the constellation Canis Major.

Sirius is reportedly the seat of God-government for this part of the galaxy.  I find it highly interesting that this is only two degrees away from the conjunction of the US natal Sun in its July 4, 1776 version.  There is obviously some kind of connection between the USA and Sirius, and I leave that up to the reader to fill in the blanks.

Four days later, Jupiter turns stationary direct, finally moving forward again to it’s next destination of sidereal Scorpio in early October 2018, making a shift into the next house in absolutely everyone’s horoscopes. Sidereal Scorpios (Sun, Moon, or rising sign) are definitely in for a boost at that time. 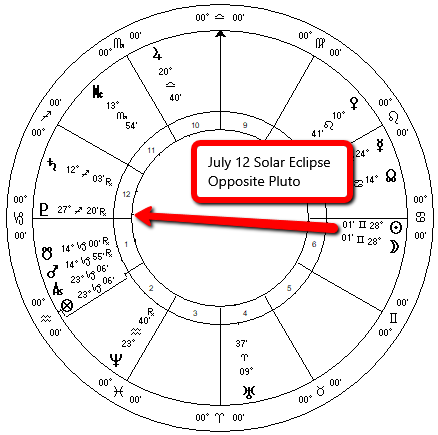 Two days after that, July 12, there is a powerful solar eclipse (the Moon blocking out the light of the Sun) which is also in tight alignment with Pluto in the sky; which should signal deep shifts on a collective level.  And then Mars about a week later, returns to it’s exact conjunction with the (mean) South Node around July 18.

Mercury then does it’s regular retrograde cycle, somewhat subjectifying life, making it more prone to illusion and all the misfortunes that follow that.

Then on July 27 Mars makes it’s opposition, which is when Mars and the Sun will be at far sides to each other and the Earth (that’s us) will be in the exact middle.  Astrologers call it “ Mars opposite Sun”; astronomers call it “Mars at opposition”.

As it does, during this particular Mars opposition, the Earth will be much closer to Mars than it usually is for the configuration. Call it a “Mars perigee”, closest to Earth.

You mind must be pretty blown by now trying to capture the “big picture” here.  You will survive it, of course, but you’ll be all the more affected by a close encounter with Mars in your life, and the effects may take a few weeks or months to fully manifest, perhaps longer.

Take what you’re experiencing and multiply it over a couple billion times, and you might see how planet Earth is going to go through it.

Monday, July 2
It may be difficult to get past the seeming impossibility, intractability, or irreconcilability of an issue, subject or situation today.  However, perseverance may bring you to a significant solution to those heretofore frustrating circumstances.  (Mercury quincunx Saturn)

Tuesday, July 3
Venus moves into sidereal Leo today, bringing out more extrovertion in emotionality and relatability to others, hopefully not an increase in vanity.

Wednesday, July 4, USA Independence Day
People and situations come together possibly to bring urgency to effect change, and anxiety and spontaneous hysteria is also potential to manifest.  Be careful accidents, injuries, and conflicts.  Over the next few days this energy will unfold.  (Mercury conjunct North Node)

Friday, July 6
First Quarter Moon
Earth at Apehelion
Sun Conjunct Sirius
The Earth, Sun and the “dog star” Sirius line up, as it will every year at this time.  You can also rearrange the letters of “dog” to get “god”; but Sirius as the brightest star in our skies in the constellation that clearly looks like a dog.  The Earth is at its closest proximity to the Sun also.  Sirius confers honor and good fortune.  Other indications are sudden bold changes accompanied by profound emotional depth.  (Sun quintile Uranus, Venus biquintile Pluto Mercury biquintile Neptune)

Saturday, July 7
Sun conjunct Canopus
Focused scrutiny may help you to navigate through heretofore uncharted territory.  Indeed as the Sun is conjunct the fixed star Canopus (the Navigator) of the constellation Argo Navis, plotting a course is an underlying theme; also conferring piety, thrift, and education.  (Mercury biquintile Saturn)

Sunday, July 8
Direction and consciousness seem to come from an unknown or unfathomable place, taking you to higher or non-dimensional (liberated from the burdens of dimensionality) thinking.  Energy and verve may be elusive as well.  (Sun trine Neptune)

Monday, July 9
Venus conjunct Regulus
Venus on Regulus, the Heart of the Lion star in Leo, may bring troubles to emotions and relationships, which may have a deficit of humility and kindness to them.  Boldness and audacity is also brought out, sometimes of which is invoked as a compensation for a dearth of other qualities such as wisdom, experience of common sense.  Truth doesn’t need “augmentation” to get the job done.  (Mercury square Jupiter)

Tuesday, July 10
Jupiter Stationary Direct
Jupiter turns on a dime, as it were, in the sky, going forward again after some months retrograding.  Projects, initiatives and our adventuresome outreaches get a new boost, a new surge and confidence (bordering on arrogance) is high.  Discussions and interactions are “blessed” with good fortune; but opportunity is not manifestation.  One in ten thousand (or less) may receive that unforeseen inheritance, lottery win, or investment windfall; but the seeds of those things can be laid today.  The universe is abundant, look at the grains of sand, the stars in the sky, the fields bursting at harvest; it is attitudinal more than anything.  The Universe also knows that too much of a good thing is not a good thing at all; but the idea of “more, greater, or better” opens up today.

Thursday, July 12
Mercury at Greatest Elongation
Solar Eclipse Gemini/Cancer Sidereal/Tropical, New Moon
Sun conjunct Castor
The Sun, Moon, Pluto and the fixed star Castor line up very intensely today; i.e. a solar eclipse.  This could be a strange-feeling or disorienting time in many ways, like a shift and the accompanying adjustment.  Depending on where it falls in your chart it will mean many things.  The Pluto factor today will bring intensity of impact to the whole affair.  Something big (and possibly bad) is near.  Mercury at greatest elongation (distance from the Sun in the sky) can indicate significant verbal, mental or communicative activity today, but the quincunx to Neptune may add a lot of complicating subjectivity to things as well.  The eclipse on fixed star Castor may help bring out the positives that are potential here.

Friday, July 13
Moon at Perigee, conjunct North Node 0250 am GMT
Superstitious date so close to yesterday’s eclipse may add lore to the legend.  The Moon so close to the Earth and the Node may increase the acuity of today’s experiences.

Saturday, July 14
Relationships move through trying, but also deceptive spaces.  Maybe sometimes it’s better to chuck connections entirely, rather than wasting your time trying to sort out all the tangled knots, which don’t have any worth to you anyway.  Maybe you can help a friend who’s going through some difficult times.  (Venus trine Saturn, Venus sesquiquadrate Pluto)

Sunday, July 15
Sun conjunct Pollux
The Sun on Pollux, the meaner of the Gemini Twins and Mercury aspecting Saturn may add to the harshness of things, especially as we choose to entertain them; but determined focus can help bring about purposeful outcomes.

Monday, July 16
Venus conjunct Thuban
Intriguing motivations in relationships, move us along the worldly path.  Venus conjunct the fixed star Thuban, the brightest star in the constellation Draco, brings to mind the powers of these mythical beasts to effect change in our lives, especially in relationships.  (Venus quincunx Mars, Mercury quincunx Pluto)

Sunday, July 22
Delightful social, cultural and artistic influences today can enhance the appreciation of life, which can open the door to abundance.  (Venus sextile Jupiter)

Thursday, July 26
Mercury Stationary Retrograde
Things are not working the way they should, especially with all the problem cropping up today, directing you to reforms.  Welcome the new insight, don’t hate it.  (Sun quincunx Saturn)

Friday, July 27
Mars at Opposition, Mars closest to Earth 27-30
Moon at Apogee 5:44 am GMT
Total Lunar Eclipse conjunct Mars
This could be a particularly malefic eclipse with conflicts, accidents, injuries and/or deaths.  The Moon goes dark as Mars is in ascendancy (highest and brightest).  Positively, strategic moves are indicated with Mars in its exaltation sign.  This could be an energetic watershed.  Venus trine Pluto and aspecting Mars today brings added depth of emotion and heightened relationship interplay.

Saturday, July 28
Delta-Aquarid Meteor Shower
Besides the Sun very close to the North Node and today’s peaking meteor shower, no other peaking influences.

Sunday, July 29
Venus conjunct Denebola, the Tail of the Leo Lion constellation, may bring reality to relationships and life in general.

Monday, July 30
Developments in relationships as the Sun aspects Venus and Mercury and Venus move into different signs.