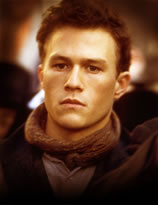 Tuesday saw the conjunction of Mercury and Neptune, typically during this time truth seems to go through distorting process so that what is thought to be truth is merely what we want it to be.

Tuesday saw the conjunction of Mercury and Neptune, typically during this time truth seems to go through distorting process so that what is thought to be truth is merely what we want it to be.

Details are sketchy yet but he reportedly was found in his bed with a bottle of prescription sleeping pills at his side; he could not be revived.  In an interview a few days previous he said that he was getting very little sleep.

This story is slightly suspicious, he was a rising star gathering acclaim for taking more difficult roles.  It would not seem that he would be suicidal.  At first it was reported that he was found with over the counter sleeping pills, so some discrepancies in the story are appearing.  Basically the sad event and story breaking under the influence of Mercury and Neptune produces uncertainty and possible intrigue.

Astrologically I would say that this could be the effects of the stresses and pressures of the previous day’s Sun/Mars/Saturn configuration could have depleted his energies or even set the stage for some terminal conditions latent in his health; and then the also-malefic conjunction of Mercury and Neptune helped to bring about a condition of sensitivity to toxicity to his body the results of which all proved to be fatal for Heath Ledger.

US "Spin" the Success of Intense Bombing Campaign

The second event of note is the boasting by US forces of successfully completing the aerial bombing "blitz" which flattened the Baghdad suburb of Arab Jabour, as Iraqis mourned the more than 500 civilians killed when 114,500 pounds of bombs rained down for ten days on the residential area home to more than 120,000 people.

You see to the US it was “good” because it accomplished its noble mission to obliterate suspected Al Qaeda operatives.  The collateral damages of the 500 innocents are immaterial to what they believe to be “success”.  It will be hard to be sure just how many died because the US does not keep track of how many Iraqis die in their operations.

The operation is very similar to the bombing of Fallujah which resulted in nominal deaths of terrorists, but produced the loss of 3,000 mostly innocent men, women, and children, and the decimation of an entire city.

Regardless of how much the US military forces believe how surgical, effective, and a force for good that they are; you can’t get very neat and precise when you drop 114,500 pounds of bombs on a residential area.  Truth gets bent here because it’s convenient, especially when Mercury and Neptune conjoin.

The third event of note was the release of a study by two nonprofit journalism associations finding that the Bush administration lied no less than 935 times on 532 separate occasions, in order to set a pretext for a preemptive attack on Iraq in 2003.  What comes to consciousness and discussion (Mercury’s domain) is proven to be lies (one of Neptune’s qualities).

So in these events we can see various manifestations of Mercury and Neptune’s combined effects: a tragic with a confused atmosphere, an example of a government trying to “spin” a horrific event to their gain, and the bringing to light of examples of a public agency’s use of deception to achieve its goals.

I bring these things out in retrospective to help us see and better understand the forces that work around and through us, and what they produce on the world’s stage.
CB