2011 has started out rather stridently with the mysterious animal deaths, the earthquakes, the “bombs” sent to US government offices, and most recently with the tragic Arizona shooting where 6 people were killed and more wounded including US congresswomen Gabrielle Giffords.  These events as I see them focalized around the January 4, 2011 solar eclipse, and event which I’ve been speaking of for over a year now.

One will hear a lot of flowery predictions around eclipses, such as they mark the beginnings of a collective spiritual renaissance.  It seems to me though that most of the new age movement, including astrologers, are utopian and delusionary in their continuing to see events such as eclipses as magical, when they are in fact decidedly bad.

I spoke of this at length in my book Mounting Challenges, that those who predict don’t see the future as much as they project the contents of their psyche onto it; i.e. whatever they are “into” they see as the end result of the days ahead.  We can call them overly-optimistic to be nice, but I think it is a disfavor to the client to tell them anything less than the truth as it bears out in the chart.

Being an astrologer means that you won’t be necessarily painting rosy pictures of a client’s future, but you will be accurate as to what their cycles suggest and not let your proclivities to be overly optimistic without justification to rub off on your client. 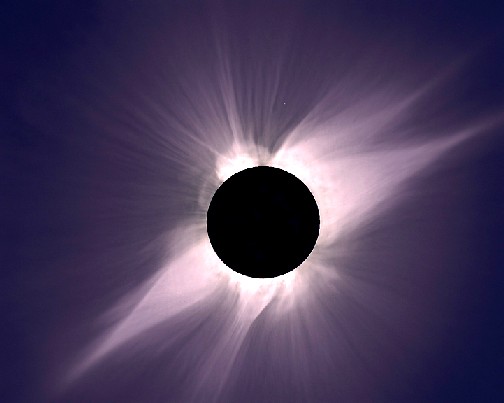 Returning to the subject of eclipses; remember this is an event where the Sun or Moon is temporarily “snuffed out” from sight, i.e. a period of darkness, confusion, and possibly despair.  The light doesn’t really go out, but subjectively it is experienced as so; this is the proto-typical “crisis” that periodically punctuates human life, a “darkening” of the consciousness precipitated by a turn of events.  Crisis is necessary, and it is powerfully transformative, but it can be quite messy.

This particular eclipse was quite powerful, being conjunct Mars and Pluto, but also squared by Jupiter, Saturn, and Uranus.  In fact this eclipse was the culmination of a series of configurations that marked the period from 2008 right through to early 2011 as spoken of at great length in Mounting Challenges.  As I wrote also, the next major configuration will not occur until the year 2020.

I find it quite disconcerting that our latest US Congress and their latest session was inaugurated right during this eclipse time as well.  There now is a majority of enthusiastic, if not fanatical right-wingers at the helm who can push forward their brand of post-terror, post-economic-decline remedies to the nation (along with a President who isn’t much different from them).

Now I’m about as against right-wingers as I am against left-wingers, extremist or reactionary approaches to politics are equally bad.  However, I am also of the opinion that Congress and the White House are equally bought and paid for by corporate interests; and that their antics is just to give the illusion of democracy, but the agenda is already set in the backrooms.

What we see in the headlines are lesser issues that have strong emotional-divisive appeal (gays in the military, taxing the upper middle class as “rich”, health care “reform”, etc.), but the larger issues of economics and war are largely supported by both sides with no question.  The Constitution only means something when it is convenient.  Wall Street, the banks, companies like Lockheed Martin, Monsanto and Cargill are favored first, the people second.

Again returning to the eclipse, it may also explain the recent animal deaths, weather aberrations, and earthquakes.  During and eclipse there is a unique line-up of the Sun, Earth, Moon, and the Nodal Axis; everything falls into a line, which can cause a multiplier effect of magnetic and gravitational fields, which may “overload” systems and cause disruptions.  We see the result in mass animal deaths with mysterious reasons, and then unbalanced individuals (possibly deliberately made that way) suddenly going over the deep end with the Arizona shooting, now being labeled an assassination attempt.

Remember that this particular eclipse was intensified by the aspects of Mars, Jupiter, Saturn, Uranus, and Pluto as well.  We could look at this very time as an energetic center-point, which like a pebble thrown into a pond, the resulting waves ripple outward for some time afterwards.  (Hopefully I can get an image of the eclipse chart up sometime later today.)

I have to admit that the last couple weeks for me have been pretty intense with demands, increasing responsibilities, and projects; StarWorldNews suffered some recently.  I have been working on my new Vedic astrology class, which people of the Twin Cities can take advantage of; and I’ve been putting the finishing touches on my other book, which you’ll be hearing more about very soon.  I’ve also been expanding into other business ventures to help free up my time to actually write StarWorldNews and expand its readership.

So bear with me dear readers, we’re in it for the long haul.

(Day by day readings to be published shortly….)