Denied What He Thinks Is His

Go to Day by Day Readings

With the current unrest in Ferguson, MO, continued fighting in the Ukraine, ISIS advances in Middle East with atrocities, and still continued assaults on Gaza; there are concurrent “wars” in the astrology of the skies above us, which has yet to peak.

The peak of this period will be over Aug 25-26, as Mars makes conjunction with Saturn on Aug 25 (just after connecting with Uranus) and then making a tridecile to Neptune on Aug 26. Mars conjuncts Saturn every 18-24 months or so, but the aspect to Neptune at the same time makes this a very rare configuration indeed.

This conjunction is the ultimate irresistible force meeting the immovable object paradox. Mars acts and relentlessly pushes on; but Saturn represents forces that just cannot be changed, defeated, or over-ridden by force, desire, or will-power. Saturn, being an outer planet, trumps Mars ultimately. When Mars is trumped, he’s bound to get angry, and like the Incredible Hulk of Marvel Comics fame, is only going to rage harder, louder, and more threateningly.

In the comics, of course, the Hulk always wins because eventually he gets mad enough (and when he gets madder, he gets stronger) that he just literally *smashes* his foes, no matter how initially big and tough they are.

But in real life, the raging force that has been thwarted by a force beyond its control, it eventually only hurts itself in vain attempts to rail against the imagined injustices and cruelties done to it. In the end the *raging Hulk* becomes a spent, fearful shadow of itself, impotent now to effect real change because it has ruined all its opportunities. Saturn, representing the higher force, now becomes an angel of cosmic mercy, sparing this *Hulk* from hurting itself even more by taking away its strength.

Saturn represent karma, that which takes away from us because we misused energy in the past, but also the force that adds to us; gives us strength, honor, and recognition because we have correctly used energy in the past, building our persona as a force for good in the world. Saturn is like the ultimate parental-father figure, chastising us for our misdeeds, but rewarding us for our *good* deeds. 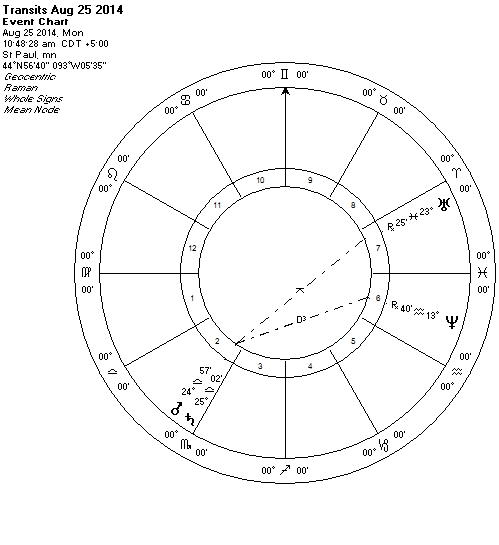 This conjunction of Mars and Saturn takes place in sidereal Libra, a sign that Mars is debilitated in, but Saturn is exalted in. So you get an idea about the level of authenticity Mars may be delivering here at this time.

Put that into context with the Michael Brown situation in Ferguson, Missouri right now. Of course we have to wait for the investigations to be completed and not jump to conclusion; but many have done that already with riots, looting, and bloodshed in Ferguson. What’s good about that?

The Israelis keep pounding the Gazans, what is left of them, in a clearly asymmetrical battle (one sided, with Isreal delivering thousands of times more firepower). But what will they get from that? Will Israel finally eliminate their Palestinian problem, but at what cost to their international reputation? Is fully occupying their so-called hereditary lands worth the cost of near genocide? What happens when they face up to an army that can actually fight back?

Will Hamas, the Palestinians, and the Arab world finally unite in their self-defense against Israel, or will the Palestinians only become martyrs in an ongoing *conflict of civilizations*? Is there any real clear winner in the conflict? 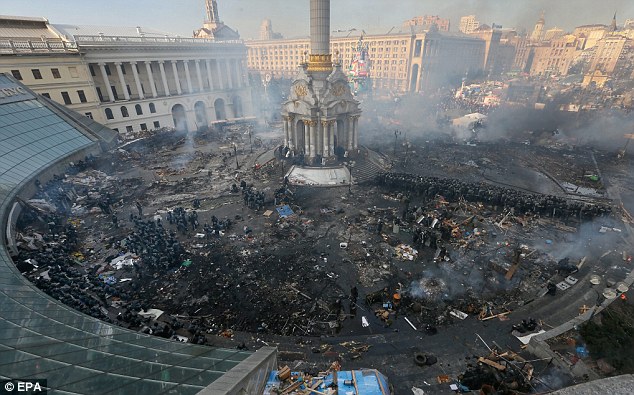 Will ISIS take over their Lavant with their new caliphate, or will they just become fodder for bombs, bullets, and tanks in a new war with the US and NATO forces, who organized and funded them in the beginning anyway?

Will the Ukraine become the next war-ravaged Yugoslavia, Serbia, or worse yet, will it become the epicenter of the next world war between nuclear powers US and Russia?

All these situations above are a deep mix of arrayed ideological enemies, manipulation by shadowy forces such as Western CIA, MI-6, Mossad, Wall Street financiers, and banking cartels, with literally millions of innocent people in the middle. They all are hot and boiling right now, world developments seem to close to manifesting. This coming week could be profoundly significant.

The Chart of Israel 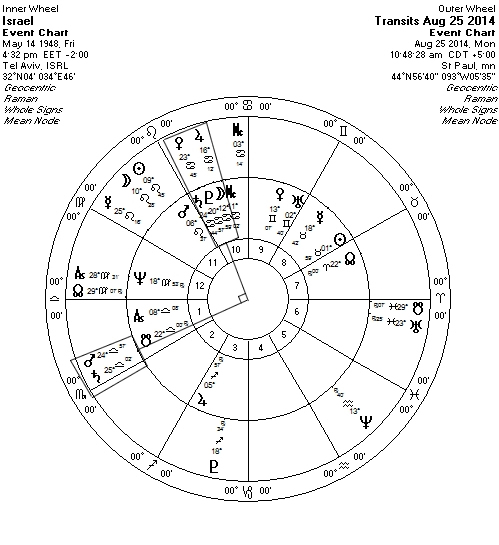 Mars and Saturn aspecting chart of the State of Isreal

Interestingly, the Mars-Saturn conjunction will be occurring in tight square to the State of Israel Saturn-Pluto conjunction. These configurations may affect the nation of Israel at their most vulnerable places (their natal Saturn). Transiting Jupiter over their natal Moon, Saturn, and Pluto may bring their identity as a nation into prominence, pray that it is not prominence of hubris instead of a humbler patriotism.

Discerning readers may also notice transiting Pluto in square to the Israeli natal Neptune, indicating that ideologies and the idea of a transcendent reason for being may be the subject of intense manipulation likely resulting in self-destruction.

The natal chart of Israel presents a many layered challenge to interpret.  In fact it configures in very interesting ways with the charts of the US and Iran, which I will be covering in some future article.

Mars and Saturn’s additional aspect to Neptune is also going to incorporate the idea of losses, necessary to really getting to the transcendent truth. What seems like a painful loss, actually becomes a great gain because former things that one took solace in are proven in the end to be enabling to a lesser sense of selfhood, which cannot be allowed to continue.

Of course, WE would allow such things to continue, because we like feeling happy and comfortable. After a while though confort and a certain sense of security becomes a block to progress. Blocks like that eventually have to go, and go they will, whether we want it or not. Hence, the raging Mars referenced above, denied what he thinks is his.

Rest assured though, I do have a more constructive/positive way to handle/experience this Mars/Saturn/Neptune energy in the Day by Day section below (Aug 25.)

Monday, Aug 18
Early on, a sense of emotional exaltation and upliftment (possibly associated with artistic, cultural or spiritual matters) may characterize the day; but which may give way to more uncertain and darker sentiments. Interactions may be intriguing but potentially misleading or deceptive. (Venus conjunct Jupiter, Mercury quintile Saturn and opposite Neptune)

Tuesday, Aug 19
Compelling, but not necessarily good situations and developments may ensue. Be careful to act in your right mind and ethics as you pass through this day. Breakdowns and breakthroughs are possible, should be a memorable day. (Sun sesquiquadrate Pluto)

Thursday, Aug 21
Charismatic and magnetic forces may allure and seek to guile the mind and senses. Circumspection and detachment as a posture may help yield profound treasures. (Venus quincunx Pluto, Mercury trine Pluto)

Sat and Sun, Aug 23-24
Emotions and the pace of events may overwhelm the sense of propriety and self-control. Be careful of accidents, injuries and other mishaps. Keeping calm may help lead you to new life-altering scenarios. Expect the unexpected. Going along to get along may not be the best strategy. Time to accent our uniquenesses, not our commonalities with others. (Mars quincunx Uranus, Sun sesquiquadrate Uranus, Mercury quincunx Uranus)

Monday, Aug 25
Disciplined focus is the theme. Not letting lesser (irrelevant to the goals) situations or thoughts impede progress now. Liberate yourself from limiting, distracting issues. Cut the cords, a whole new world awaits you, free from the worries of a lesser version of yourself from the past. Discerning, balanced perspective will take you far. New people and situations may greet you on the way. (Mars conjunct Saturn, Mercury sextile Mars and Saturn, Venus trine Uranus)

Tuesday, Aug 26
Relationship may take unusual and trying turns, testing your tolerances. Finding energy and motivation may be the challenge, daunted by looming issues. Be sure your track is good on all levels, not merely expedient; that everyone is on the same page, and all are true to themselves. (Mars tridecile Neptune, Venus square Saturn, Venus biquintile Pluto)

Friday, Aug 28
Relationships may present unique challenges, especially regarding discernment of truth, motivations, and the level of honor in them. Delays and obstacles may challenge your happiness, but the work ethic can prevail. Discussions and study may become exciting, but the details may subtract from infectious energy of it. (Sun opposite Neptune, Sun quintile Saturn, Juno opposite Pluto, Mercury semisquare Jupiter)

Saturday, Aug 30
Venus enters sidereal Leo, signaling a shift in your affairs (according to where Leo lies in your chart). Love may become a more warm affair.

Monday, Sept 1
Very interesting, if not challenging day. Strive to keep your energies and emotions under your control, they are the horses moving your chariot. Painful, but dear lessons may become clear today, presenting to us our personal and collective inconsistencies, goading us to work harder and be more true to our core selves. Be careful of potential accident, injuries, mishaps, and the like; things may not as planned. (Mars biquintile Uranus, Saturn tridecile Neptune)