December 2019 Predictions: End of the Decade and Solstice 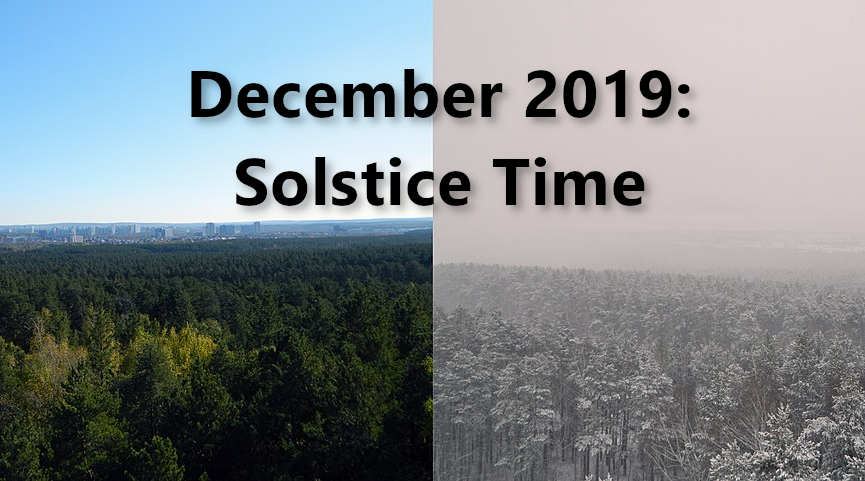 Last Month of the Decade

We are in the last month of the last year of the decade.  It’s a pretty good time to end on a win.

When we “win” the victory is not over others; it’s a victory over defeatism, dysfunction, and deceit within us.  Obstructing-thwarting thoughts removed, our success in our endeavors is almost assured.

The world might have us think that we’re competing in some battle royale for supremacy.  I think the real battle is internal “vanquishing” the lazy, complaining, envious self that co-occupies our consciousness, letting the shining powerful real self to step forth.

In a world characterized by scarcity; only so much money to go around, limited resources, limited jobs, energy, etc. (all conveniently made to occur by oil cartels, central banks, and monopolies), it’s then that we start to get into the desperate “dog eat dog” mentality of the so-called free market.

However, in a world characterized by unlimited abundance, natural and not engineered for domination and control by a few, then there is no need to fight for the scraps that fall from the master’s table, as it were, everything is generally available to acquire.

Therefore, while we may not be able to control the ups and downs of the markets and economies, we can control our accessing of unlimited energy from our divine source (the I AM Presence) by eliminating the self-limiting concepts and beliefs and charge forth to do amazing things with the abundance that still flows internally.

December brings us to the solstices.  Depending on which hemisphere of the Earth you live in, December 21-22, will be either the longest or shortest day of the year; i.e. summer or winter.  It’s the solstices and equinoxes which mark out for us the seasons.  Between the shortest day of the year and the longest, there are two days which mark the exact midpoints of those extremes where the days are of equal length; hence the name equinox.

It’s the tropical astrology of the West that uses the vernal equinox as the starting point of the zodiac, regardless of what actual stars form the background of it.  It’s the sidereal (“star”) astrology of the Vedic school (of which I’m an adherent to) which uses the actual constellations themselves to mark out its zodiac.  Therefore, it’s the western variety of astrology which gives a little more emphasis to the day; but it is an event which has solely to do with the relationship of the Earth to the Sun, which is intrinsically important to us all.

Sunday, Dec 1
Being yourself means throwing off what others will tell/think you “should” be, or what or how you “should” do it.  Find yourself and fly with it.  (Sun biquintile Uranus)

Monday, Dec 2
Good fortune and strength of leadership come out.  The mind can ride a powerful wave to persuade, to investigate or to understand.  (Sun conjunct Antares/Aldebaran, Mercury sextile Pluto)

Tuesday, Dec 3
Relationships take center stage.  Motivations may be strong, but ethics may be ignored.  People and situations are not here just to facilitate our plans, goals, or desires; there is a bigger picture to always consider.  (Venus conjunct South Node, Venus sextile Mars, Mars quintile Pluto)

Wednesday, Dec 4
We may find ourselves “taken out” of reality for some fantasy world excursions: some impracticality, some delusory irrelevancy, during some moments, but sometimes these dream-transports may allow us to receive inspiring messages.  Relationships may need to work through emotional matters.  (Moon conjunct Neptune, Venus square Juno)

Monday, Dec 9
Troubling revelations, but knowledge is always helpful.  (Mercury opposite the Pleiades)

Wednesday, Dec 11
Love is forged and tested, flexibility and resilience will be useful in the process.  Moon on Antares/Aldebaran gives creative insight.  (Venus conjunct Saturn)

Thursday, Dec 12
Full Moon
Cognitive blocks and dysfunctions early on, but later in the day as the Moon opposes Jupiter things that seemed so intimidating earlier dwindle in significance.  (Mercury semisquare Saturn)

Friday, Dec 13
Everything may seem easy right now, especially if ethics may seem more adjustable as well.  Deep emotional tides bring us to certain people, situations and circumstances, but not all may be right with them.  (Mars trine Neptune, Venus conjunct Pluto, Mercury semisquare Pluto)

Saturday, Dec 14
Geminid Meteor Shower
Serious application demands intensity of determination for breaking through, down or out of something.  Friendliness and affectionate spaces also today.  (Moon opposite Saturn and Pluto, Moon opposite Venus)

Sunday, Dec 15
Expectation in the air; and as some people say, “ the harder I work the luckier I get”.  (Jupiter trine Uranus, Mercury conjunct Antares/opposite Aldebaran)

Tuesday, Dec 17
Good fortune and courageous attitudes as the Moon conjuncts the Heart of the Lion Regulus early on and then forms a grand trine with Jupiter and Uranus.  Sudden elation and joy.

Saturday, Dec 21
Jarring experiences or problems adjusting to new sitations.  Keep with it though, change is not supposed to be a readily understood process.  (Mercury sesquiquadrate Uranus, Moon opposite Uranus)

Monday, Dec 23
Ursid Meteor Shower
The Moon opposes Algol and the Pleiades, setting up some severity.  Mars enters sidereal Scorpio, giving added psychological strength to do what must be done for the next 6 weeks.

Wednesday, Dec 25, Christmas Day
Solar EclipseThe Moon comes especially close to the Sun, affecting the light somewhat and life may be appropriately not-norm for a bit.  Holiday celebrations in a different space.  European and Asian time zones have the eclipse on Thursday, Dec 26.

Thursday, Dec 26
Still in the shadow of the eclipse, clarity and honesty (self- or otherwise) may be an issue.  Finding motivation or energy may call for subtlety.  (Sun quintile Neptune)

Tuesday, Dec 31
The last day of the decade may find us in a contemplative or rhapsodic space, but the danger of all the wrong ideas driving the narrative is present.  Let’s strive to start the new cycle with a more caring and sensitive approach.  (Mars tridecile Neptune, Mercury quintile Neptune, Moon conjunct Neptune)