Chris Christie’s, governor of New Jersey, fortunes seem to have taken a turn.  He had a fast, powerful rise in the New Jersey political arena, during the 1990’s and early 2000’s, and he seemed to be a Republican rising star that could have ended up in the White House.

Now, however, he has become enmired in the Bridgegate political turmoil, and has fallen from favor with the new incoming Trump administration.  I thought it would be educational to take a look at his horoscope and see how his political disfavor may be a direct result of his “stars”.

There is no exact birthtime for Christie available, but his  birthday is Sept 6, 1962 in the city of Newark, NJ.  I did a preliminary rectification of his chart, using his history as a baseline and very quickly came up with an early morning birthtime of around 7 am.  This is not an exhaustive rectification, but it seems to work well enough and I thought I would run with it.  So that is my initial disclaimer. 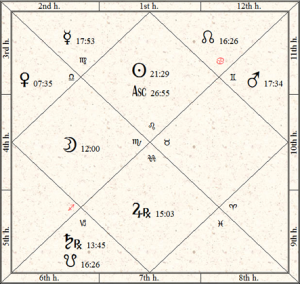 Using the above birthtime and the sidereal/Vedic chart (and my preferred Raman ayanamsha) Christie has both the Sun and Ascendant in the sign of Leo, with the Moon in Scorpio disposed by Mars in Gemini.

Leos are outgoing and domineering by nature, and power seems to be their forte, as well as their weakness.  They can crave and covet power, influence, and the esteem of others, so much so at times that ethics becomes secondary to the acquisition of recognition, much like Donald Trump’s own Leo rising chart.

Christie’s rise to power was a long line of political cronyism, money for position, and outright slander and mud-slinging tactics, selectively attacking his enemies while rising on the backs of others who had questionable integrity themselves.  It could be said that he put some people rightfully in jail, but he also reduced the pool of criminals allowing those still in power to succeed all the more.

Christie’s Sun is also in Vedic rasi-aspect to his natal Saturn, so personal drive and success can be heavily weighted by pathology and cruelty even.

The Moon in Scorpio disposed by Mars in Gemini corroborates his verbal aggression, as well as his zeal to succeed.  His Mars receives a Vedic (as well as Western) trine from Jupiter adding to his audacity as another component to his success.  Mars also makes Vedic fourth house aspect on his Mercury again reinforcing the aggressiveness verbally and otherwise theme.

Christie’s tenth house (the house of success) ruler Venus is in it’s rulership in Libra in the third house, emphasizing a sort of theatricality to his renown as well as the aforementioned driven nature.  Jupiter also trines (Vedically) his Venus, bringing career success, as well as overall good fortune and material wealth. 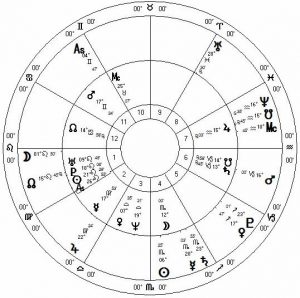 Jupiter is in aspect to both his Sun and Moon, all the more corroborating the “fortune favors the bold” theme of his life.  Jupiter aspecting both the Sun and Moon can contribute to what could also be called his “expansive” waistline.

In the Western chart his Sun is also closely conjunct Pluto, giving a western equivalency to the aforementioned qualities, but maybe giving a terminal nature to them, more of which I’ll be covering soon here.

The North Node (Rahu) in the twelfth house, disposed by the Moon in Scorpio in the fourth denotes a secretiveness or big parts of his life that are not normally brought to light, a theme which is not so surprising to the political world and its backroom, money-driven, and typically criminal workings.

He does have Uranus in his first house, so he definitely will rattle the status quo one way or another.  He’s an agitator as much as he’s a power-broker. Saturn, however, in rulership in Capricorn in his sixth house, is the ultimate deliverer of accountability and reality to his world.  It brings him down as much as it teaches him valuable lessons.

So using my rectified birthtime of 7 am, Christie has recently entered an exquisitely Saturnian time, meaning that fortunes are not so great anymore.  We all will pay the karmic piper, which is Saturn, the question is only when (which you need astrology to know). 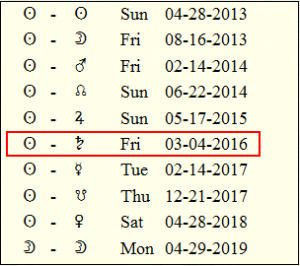 In April of 2013 Christie entered his Sun maha dasa, which could be considered the best time for “glory”, appropriately symbolized by the Sun.  All things being equal this could be thought of as his time of professional acclaim and success.

As I pointed to earlier, Christie’s Sun is in rasi aspect to Saturn, therefore his Sun periods must be conditioned by Saturn’s difficulties as well.  Success is curbed or thwarted.  His whole Sun maha dasa will have success, but significant setbacks as well.

Transiting Saturn was also in tight square to his natal Sun during a good part of 2016, as well as in the house of his Moon, which is a challenging time (also called Sadi Sate in Vedic astrology).

The transiting Nodes were also right over his Sun-Pluto conjunction during this time, and transiting Jupiter’s concurrent transit over those points was not enough to deflect the karmic landslide.  Jupiter may have kept him in power at least, as things could have gotten much worse potentially.  Transiting Neptune aspecting those same points didn’t help keep clarity either.

Christie is up for reelection for Governor in 2018 and by that time Jupiter will be making multiple good aspects his chart (aspecting his powerful Venus and Moon, and tenth house) so he may be feeling the wind at his back fortune-wise again, but then also Saturn will be in tight aspect to his Mars so it won’t be that easy.

At that time Neptune in tight aspect to his Sun may help give the illusion of power to his life (which most certainly will have it’s downfalls), more corruption and deception may be employed, which won’t pay off in the ultimate end.

He will also have entered the maha (great) dasa of the Moon (in April 2019), which is heavily influenced by Mars and rasi-aspected by Saturn, which could be much similar to his current Sun dasa that started in 2013, which was not exactly smooth for him, but this time it could be more severe in it’s ups and downs.