Barack Obama Pt 1: The Man Himself 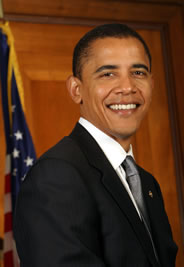 Barak Obama has swiftly come up the ranks from lawyer to Illinois state senator to US senator and now possibly to US President if he wins the 2008 US election.  The key to electability today is not leadership ability, but marketability of the message, an image of the candidate as a champion of the people, and the final approval of the Electoral College the following January….

The placement of Obama’s Sun in Cancer is interesting and apropos for a Democrat, because they like to be called the “caring” party, those who take care of the “little” people, making sure they are fed, educated, and taken care of medically.  The placement of his ascendant ruler in the favorable ninth house, a house associated with spirituality and higher knowledge; to me this helps lend to him this so-called “messianic” quality to him, which has literally caused people to faint with bliss in his audiences (maybe not so much now, but initially).  He just has a magical air about him that could make things happen….

Barak Obama has swiftly come up the ranks from lawyer to Illinois state senator to US senator and now possibly to US President if he wins the 2008 US election.  Bi-racial, author, married 16 years with two children, Democrat, and only 47 years old; he’s contending for Oval Office against John McCain and Hilary Clinton. 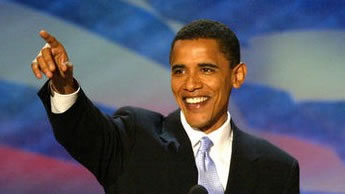 As I was researching this article it occurred to me that Obama is the perfect “everyman”, almost a clean white page which any handler or veteran campaign manager can groom for best results in an election.  I won’t get into some of the more controversial aspects of his career besides saying at the outset that he has a powerful set of Washington insiders backing him up, he mysteriously came up out of nowhere to national prominence (just like Jimmy Carter and Bill Clinton in days of old), and that there are a few unanswered questions about alleged illegal drug use with a man named Larry Sinclair, and also the murder of the Trinity United Church of Christ’s choir director Donald Young (who was connected to Larry Sinclair) found dead in his apartment Christmas Day 2007.  Get more info here

He is running neck and neck with Hilary Clinton, but has been dogged lately about his connection with the Trinity United pastor Jeremiah Wright, who has made several controversial remarks during sermons in the past.  Obama has had to distance himself from Wright, and may have successfully weathered that political storm, but there may be more to come.  Those issues will be covered in part 2 of this report to be published shortly; but Obama has enjoyed quite a bit of popularity including an almost “messianic” effect on swooning supporters including Oprah Winfrey.

At this point he enjoys the greater amount of delegates from the Democratic Party, and he is quite close to the party nomination.  But the race is still hot and a clear front-runner hasn’t shown yet.  As of this writing (early May 2008) Obama is slightly ahead in delegate count and in voter polls.  Hilary Clinton, however, is a formidable contender.

I had a hard time getting the “feel” of his chart.  To be frank his career is either too short or just too 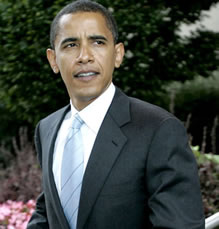 undistinguished to really grab onto something in order to do a proper rectification.  However a few things lead me to believe that this is a workable chart of Barack Obama (Aug 4, 1961; 1: 06 pm; Honolulu, Hawaii); on the day of his official campaign announcement transiting Mars was conjunct this natal Midheaven, which is a pretty good “hit” and this would seem to be a chart of such a visionary leader as Obama is purported to be; including “swooning ladies” in his audiences.

I have developed over the years a very pessimistic or skeptical attitude in regards to astrological interpretation, and it has served me well.  I have no illusions about who and what political candidates are these days, little more than charismatic faces attached to larger globalist/corporatist/banking concerns that more or less run the world already.  The key to electability today is not leadership ability, but marketability of the message, an image of the candidate as a champion of the people, and the final approval of the Electoral College the following January.  The actual election itself on November 4th will not be the sole determiner of who becomes President; it could be considered to be a straw poll that the Electoral College will be suggested to vote for.

A partial list of Obama’s advisors shows that he is very much a product of the Washington inside-the-beltway-business-as-usual-crowd. He may have fresh face, but behind him and his campaign are some very familiar names:

This report on his chart will be based on the techniques of Vedic Astrology, using its sidereal zodiac.

Barack was born with the Sun in a very prominent place in his chart; in the most elevated house, the tenth; in the sign of Cancer, a sign that the Sun is favorable in.  His Sun is also powerful by being in the middle degrees of the sign itself.  Further, the Sun’s dispositor (planet ruling the sign it occupies), the Moon, is itself very strong in the sign of its exaltation, Taurus.

The Sun is also Obama’s atmakaraka (planet most advanced in any sign) and therefore this strong solar accentuation in his chart gives him personal strength, prominence, and potential for success in life.  The placement of Obama’s Sun in Cancer is interesting and apropos for a Democrat, because they like to be called the “caring” party, those who take care of the little people, making sure they are feed, educated, and medically taken care of.

This Cancer accentuation, being a water sign, brings out the visionary quality to his campaign.  He embodied ideals and broad concepts and he catches the imagination of the populace.  People respond to him emotionally, and this watery Cancerian quality can act as a reflecting pool mirroring said people’s hopes and dreams.

But it is a shimmering, fluctuating quality; which the passage of time could reveal that he moves between a wide range of subjects or phases of manifestation.

The disposing if his Sun by the Moon in Taurus in the eighth house would corroborate a “support” by a powerful financial interest that likes to move in secret and could be quite ruthless in pursuit of its goals.  It would also indicate that his mother and other important ladies in his life are quite powerful and are similarly inclined motivationally. Obama’s wife is a prominent lawyer herself.

This chart also gives him a Libra ascendant, which would corroborate his charm and ease at public speaking.  In my opinion he certainly has the best delivery of the three.  He is interested in creating relationships and a feeling of harmony and that is the tone of his being.  The placement of his ascendant ruler, Venus, in the favorable ninth house, a house associated with spirituality and higher knowledge; to me this helps lend to him this so-called “messianic” quality to him, which has literally caused people to faint with bliss in his audiences (maybe not so much now, but initially).  He just has a magical air about him that could make things happen.

Regarding his early parental influences this chart seems to fail a little bit with a relatively unafflicted ninth house (the ninth house rules the father).  Obama was separated early on from his father, who then went back to Africa and became destitute and died. His mother was described as argumentative at times and dealing with the stresses of a bi-racial marriage in the early 1960’s and a disinterested husband whom she divorced soon enough in 1964.

Obama’s second and fourth houses which describe family dynamics are appropriately afflicted: Mars-ruled Scorpio on the second and Capricorn with a retrograde Saturn in the fourth.  The Sun as an indicator of the father also is afflicted with the aspect of Saturn upon it.

These are molding, hardening formative forces in Obama’s life, giving him strength and courage to rise up, but maybe showing that there is a little bit of unresolved psychological baggage under the calm Libran façade.

Obama’s seventh house ruled by Mars and Mars itself falling in the secretive and vice-laden twelfth house presents interesting possibilities with regard to his partners in life, but also his behavior towards relationships.  With a Libran ascendant and Mars in the twelfth house this can indicate pathological sexual liaisons, or at least an overly cruel mate at times.  This would corroborate the Larry Sinclair allegations above.  Nevertheless, it would seem that this chart would indicate that all is not just what meets the eye in his relationship world.

The North Node of the Moon (called Rahu) in Leo in the eleventh house could indicate a strong desire to be the center of attention, to be in power, and to be somewhat “in awe” of himself as Leo’s sometimes are wont to do.  There could be a somewhat pathological drive to power, and he may attract influential, powerful associates (always a good political asset).  He most likely would receive financial rewards in dramatic measure, which politicians seem to do.

Interestingly also the rulership of Mars (a somewhat nasty planet) on his second house falling in the sometimes-dicey twelfth house could be connected to shady financial deals as an issue in life.  The 2005 land deal in Chicago Obama was a part of could be an example of shady dealings.

Obama has also been connected to radical elements back to his college days.  William Ayers and Bernadine Dorhn and their so-called Weathermen movement, who have been called no less than terrorists back in the 1980’s were associated with Obama.  This may not actually be very relevant now, but I should say that a rogue Mars like Obama has in the twelfth house could be attributed to subversive, radical, and extremist associations that hang around like skeletons in the closet.  Click here for more information on this matter

Part 2 of this report will deal with the connections between the astrology of the US and Obama.  Part 3 will deal with Obama’s current cycles leading up to the election and inauguration in 2009, and maybe a little more after that.  All the three main candidates will be compared comprehensively to see who actually has the best shot at the Oval Office as told by their astrology.