August 2018 will close out with Mars making a direct station on the 27th, while simultaneously involved in a fifth harmonic configuration, which is fairly rare.

If could characterize the astrology/energy of the summer of 2018 it would be “agitation”: eclipses centered on Mars and Uranus in square.

War threats with Iran, drama in the White House, and economic rumblings with trade wars and supposedly blue-chip stocks taking amazing hits in their price, all is not hunky-dory on the world scene.  The world is uneasy enough already, but a reactionary president of the US, an economy built on the shifting sands of greed, and discontent boiling over, the outlook is not turning peaceful.

Some people may think Donald Trump is exhibiting signs of being unhinged, and with all the pressure and unease he undoubtedly feels at more being exposed with his life than he comfortable with, and the already-mentioned hair-trigger world situation; it’s not impossible that he is.

Trump, who has for a long time basked in the glory of celebrity, but who has always at the same time escaped deeper scrutiny of his business and personal affairs; he may be one who discovers personally that all skeletons in the closet will eventually come out, and maybe at quite inopportune times; hence the irritability.

I’ve always postulated that “they” dangle these exposures of him (with may be lots of photographic evidence) to keep him in line, to conveniently forget his campaign promises and executing the supplied “real agenda” like all his predecessors.  Having a debilitated Saturn in the twelfth house, conjunct Venus and Pluto, and disposed by the Moon in Scorpio, it is not a stretch to say so.  The twelfth house by definition means skeletons in the closet and hidden enemies, such as those who would blackmail him.

I’ll spare my readers from more of my bashing Donald Trump, but it’s all connected to the astrology.  I should also remind readers that my delineating of the chart of the Trump inauguration shows it to be the worse presidential chart in recent memory, worse than that of the first term of George W. Bush, and everything is outplaying quite accurately from the charts.

Read more about it here.

Getting out of the realm of the political, maybe personal, family, health, and material concerns are heating up in your world, or your trying to “break out of that shell” into a new life and it’s not so easy as you might have imagined it to be.  Becoming something which you’ve never been before is scary by definition, because you don’t know exactly what you’ll experience until you get there, and you find it quite frankly to be really intimidating.

Being warm, happy and feeling safe makes us weak, but it is very known, comfortable and familiar, so our body likes that.  A state of no-pain, however, is like sleep, very beguiling, intoxicating, and addictive.

Enter then the malefics, Mars, Saturn and the others to pull those toxins out of us, harbored deep in our psyches, make us deal with our problems (as we are the author/creators of those problems) and overcome them, replacing dysfunction with supreme capability.

So we have Mars, Uranus, and the Nodes to contend with this summer.  It’s been fun, right?  Perilous might be a better word.  But we all have free will, we can choose to plunge deeper into our pathologies and seek deeper escape, forestalling reckoning, and only compounding the difficulties we’ll experience next time Saturn or the Nodes come around.  So, might as well get on with it, choose to address issues, deal with them and make good on everything.

So, you can’t choose for Donald Trump, he has to make his own decisions, honoring his heart (or what’s left of it), or his head with all it’s scheming, rationalization, and propagandistic erroneousness (which heads typically do).

You, on the other hand, have to exercise your own sovereign prerogative in your life, drawing up that courage (from the heart) to do what you have to do.

When its all said and done, you’ll thank the planets for all they put you through.  The planets don’t need thanks though, THEY just do what they do.  Be like a planet.

The fifth harmonic is a very profound thing to meditate on, it is the circle divided up into five sections, which gives rise to the pentagram, which reminds us of our five fingers, five senses, and five major appendages (head, legs and arms).

Fifth harmonic aspects embody what I would call incisive creativity, not as overwhelming powerful as a square, and not as passive as a sextile, but they make things happen.

August 27th the harmonic forms between Sun, Mars, and Jupiter, and this happens on the day that Mars turns stationary direct.  So, I predict a good “kick” into gear of something. 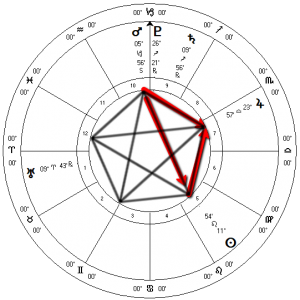 Anyone with any point in their chart at 24 degrees Libra sidereal or 18 degrees tropical Scorpio may receive an extra boost.  Jupiter in sidereal Libra may indicate good turns in relationships.

As you can see in my rough-hewn graphic the Sun, Mars and Jupiter are either at 72 or 144 degrees apart from each other.

What you don’t see in this graphic as readily are the just-past trine of the Sun with Saturn and Uranus, and the sesquiquadrate between the Sun and Pluto.  All in all, August 27th could be a very amazing day.

Wednesday, Aug 1
Some days are not easy, nor should they be.  The little, fearful, clutching self sees the negative outcomes.  The greater self sees to upside potential, now about to start manifesting.  The greater self owns up to life’s situations and engages self-power to effect change.  Change may be urgently needed today, don’t let the volatility of a situation run out of control.  Be careful of accidents, injuries and other misfortunes.  (Sun biquintile Saturn, Mars square Uranus)

Thursday, Aug 2
Don’t let discouragement take hold, or that doing something knowingly dysfunctional is “somehow” okay.  It’s that blurriness/vulnerability where something amazing may or may not happen.  Vitality may seem quite absent.  (Sun biquintile Neptune)

Friday, Aug 3
Relationships are accentuated, opening up exciting new vistas.  Be careful of someone who seems to exude great promise, but ultimately fails to deliver.  Mars on fixed star Altair can amplify boldness and incisiveness to take you to success.  (Venus and Mercury aspect Uranus, Juno opposite Jupiter)

Sunday, Aug 5
Chill out, obsessive and compulsive tendencies are brought out.  You don’t need to win that argument or solve that problem RIGHT NOW.  Strive to let it go, the so-called victory of it is quite small.  (Mercury quincunx Pluto)

Friday, Aug 10, Moon at Perigee
Obstacles, delays and the sensitivity to the sense of misfortune they bring are sensitized, making for difficult, crabby people.  Don’t be that, determinedly move through problems with confidence that nothing is ultimately unsolvable.  The Moon closest to Earth today may bring added relevance to affairs. (Sun sesquiquadrate Saturn)

Monday, Aug 13, Perseid Meteor Shower
Relationships move through difficult territory.  Unexpected developments and outcomes may shake your confidence in things you thought heretofore were good. Around midnight streaks of light in the night sky may give a sense of magic. (Sun tridecile Uranus, Mars and Saturn aspect Juno)

Thursday, Aug 16
Jupiter conjunct the brightest star in Libra constellation has been associated with deceit and hypocrisy.  Consider the source, motivation and goals of people and situations making bold proclamations or demonstrations.

Thursday, Aug 23, Moon at Apogee
Regal, courageous and brash Regulus, the star that is the heart of the Lion in Leo constellation is conjunct the Sun today.  Boldness and audacity for all.  The Moon farthest from Earth today in its monthly orbit around us.

Saturday, Aug 25
The Sun forms a grand trine with Saturn and Uranus today.  Upward movements and changes are possible in practical ways.

Thursday, Aug 30
The Sun conjunct fixed star Thuban and Mercury tridecile to Uranus may help us to successfully get “out of the (mental) box” that has heretofore trapped us.  Venus entering sidereal Libra today may help relationships for the next month or so.

Friday, Aug 31
The power of love can be used to great effect.  Used to exalt one’s ego, has much more limited scope than those who may use the power of love to uplift all.  (Sun semisquare Venus)