This week is fairly quiet astrologically for the first part, then it some significant developments occur.  This clusters around a larger configuration forming in the skies around us of Saturn opposing Uranus, which will be both aspected by Jupiter.  This larger configuration becomes exact during the last week of January and the first week of February 2009.

The meanings of this configuration look to be tension (the Saturn/Uranus opposition) which can incite social changes, getting a boost of energy and enthusiasm (provided by Jupiter).  Not too surprisingly this roughly coincides with the inauguration of President Barak Obama on January 20th, 2009; which certainly will have no small share of hype and collective hopes and dreams projected onto it.

Before I dive headlong into the Obama astrology Pandora’s box (for another article), let me get back to the astrology for this week.  This most significant day looks to be Saturday, January 24, when Venus opposes Saturn and sextiles Mars; which looks to be a very relationship-oriented time, but of relationships that might have elements of hesitation, strain, or basic incompatibility; but there should be some desire (possibly of a pathological nature) sprinkled in to move things along a relationship-track. 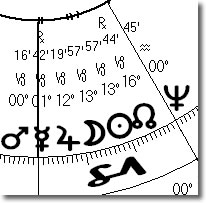 Normally eclipses are significant enough, the Sun and Moon lining up with their Nodes, but this particular solar eclipse on January 26, 2009 takes place in the sidereal sign of Capricorn with more than a few other planets in the same sign.  Capricorn means austerity, determination, and ambitious focus; so it might not be a stretch to expect a lot of seriousness and weighing of heavy issues.

President Obama was pretty strong already on the "America must work hard" theme, that there will be austerities before prosperity returns to the nation.

A look at Capricorn’s dispositor Saturn will give further clues to the outpicturization of the energies of this eclipse; Saturn rignt now is not in a good state being stressed by an opposition from Uranus and in its fall in sidereal Leo.

What this can mean is that there is an increased expectation of hardship or a state of mind which many people seem to mistake for pessimissm or depression: that of a very serious, non-frivolous, arduous state of mind.  This is something that people who party at the drop of a hat may find hard to deal with.  Partying, of course, is one way to offset depression; the part that is of concern though is using a facade of happy times as a way to cover up, or attempt to bury completely nagging concerns that one is not attending to important tasks.

Since Capricorn is a sign ruled by a "malefic" planet, it is also not a stretch to have a guarded expectation of hardships, crisis, or other misfortunes occuring on a larger scale.  The aspect of Uranus on a debilitated Saturn (as the dispositor of this eclipse) could indicate events of a precipitous, sudden, or shocking manner.  Uranus occasionally will like to upset the status quo, which has  become a little too hardened or rigidified in its role as an authority figure, icon, or concept.

According to my observations, any sort of manifestation (good or ill) from an eclipse should manifest right around the time of its occurance.  Many times a definite strangeness or weirdness can be felt, thing not seeming to go right; this can certainly be because of the much-closer alignment of the Sun, Earth, and Moon to each other during eclipses.  A word to the wise is take it a little more carefully than usual especially during the first part of next week.

Thur, Jan 22
The situations, thoughts and desires that bring people together may be stimulated, which may pass as soon as they came, being highly sensitive to elements of control and the deeper problematical issues usually surrounding relationships.  (Mars and Venus sextile Uranus)

Fri, Jan 23
A feeling of being able to do anything and having no limits is possible, which can lead to a lot of bold pronouncements and promises but rarely are followed through on.  Spiritual ardor and the mind should have an increased expression.  (Sun conjunct Jupiter)

Sat, Jan 24
Relationships are accentuated, but which have elements of incompatibility to them, personal inhibitions may stop full expression of the feelings. Application of the will and hard work are favored.  (Venus opposite Saturn, Mars trine Saturn, Venus sextile Mars)

Sun, Jan 25
Anxiety, frustration, and acute feeling of suffering may accompany misfortunate turns of events.  A lot of your inconsistencies and personal liabilities may come out for you to address.  (Sun sesquiquadrate Saturn)

Mon, Jan 26 Mercury sextiles Venus increasing cordiality for all.  See eclipse info above for more into about today.